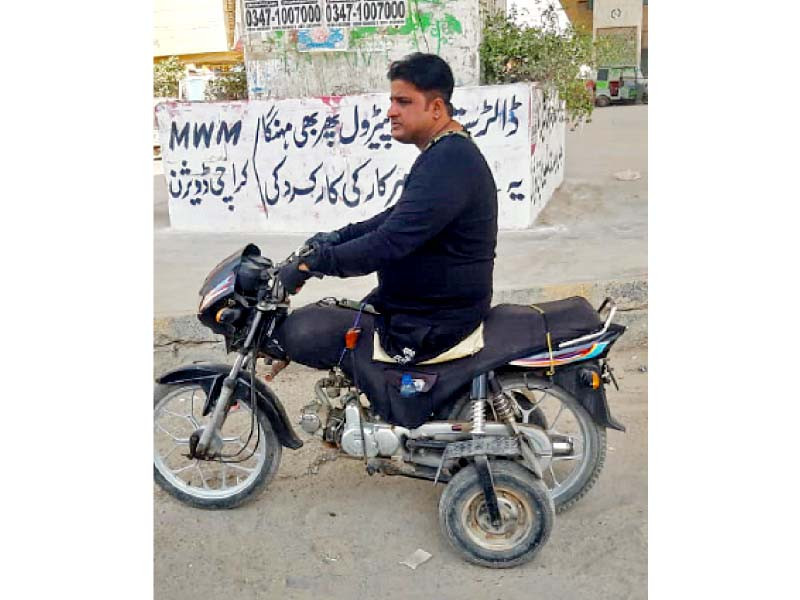 The young Tahir had dreamt of becoming a bodybuilder and representing Pakistan internationally. He would spend most of his free time in the gym. But on a fateful day of the year 2008, a drunken trucker ran him over. He has never walked on his feet since then.

Doctors had to amputate his left leg, leaving the aspiring bodybuilder wheelchair-bound. This devastating accident shattered his dream, but could not take away his zest for life. He decided to live a life that is full, instead of begging on the streets. Today, he is a successful Bykea driver.

“I was a sales assistant at Mitsubishi Motors. I was going home on my motorcycle from the office when a drunken truck driver ran over me. Nearby people shifted me to hospital where doctors amputated my left leg which was badly crushed,” Abbas told The Express Tribune recalling the life-changing mishap. However, he pardoned the driver who left him disabled for life.

“I lost my marketing job. The company paid me two-month salary and sent me home,” he said, adding that it took him a few months to recover. He did not want to become a liability for his family and society, so he found a job at a factory.

“After one year, I managed to buy a three-wheel motorbike and joined Airlift Express to deliver groceries to online shoppers,” he said. Two years, another twist came in his life-story when the company discontinued the service and he was laid off.

“I joined Bykea as a rider. Now, I work ten hours a day,” Abbas said, adding that he earns up to Rs.2,000 a day. “Since I can earn a living, then why should I be begging or living on charity. I do not feel good if people think that I have a disability and need help,” he said.

Abbas is married with no kids. He and his life live in a joint family, but he has dream of owning a house one day. “Since my childhood, I have always made up plans on how to earn, how to run a business, so that I can have my own house, and a healthy and wealthy family,” he added. “I am struggling, but I’m sure my dreams would come true on day,” he added.

Abbas was the best player of his college cricket team in Korangi. Now, he has lost his leg, but this did not affect his passion for cricket. He goes to cricket grounds to watch matches whenever he finds time. “Bodybuilding was my passion. I started it when I was 14-year old. After recovering from the accident, I continued it, but had to give it up because I felt feeble,” he said.