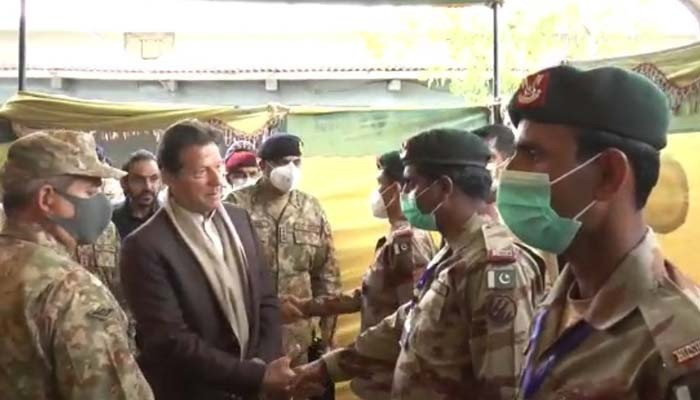 NAUSHKI: Prime Minister Imran Khan on Tuesday vowed that Balochistan’s “true potential” shall be realised “by means of a comprehensive national effort”

“Through a comprehensive national effort, cooperation between federal and provincial governments and assistance of armed forces, we shall realise [the] true potential of Balochistan,” PM Imran was quoted as saying by the Inter-Services Public Relations (ISPR), while giving an update on the premier’s and Chief of Army Staff (COAS) General Qamar Javed Bajwa’s day-long visit to Naushki, Balochistan.

The PM and COAS visited the area along with Balochistan’s chief minister, governor, federal, and provincial ministers.

The military’s media wing said that the premier was provided with a detailed briefing on the security situation of the area following the successful repulsion of two separate terror attacks in Naushki and Panjgur by the security forces.

The ISPR said that in his interaction with troops, PM Imran “paid rich tribute to the martyrs and their families for their ultimate sacrifices for Pakistan”.

He also lauded the professionalism exhibited by the troops and appreciated their operational preparedness and bravery with which terrorists’ attacks were repulsed.

The premier also reiterated the national resolve to support the armed forces in eliminating the remnants of terrorists trying to sabotage the development of Balochistan.

Separately, the PM, in his address to the troops, announced a 15% raise for the FC and Rangers personnel.

The prime minister told the troops that he especially went to Naushki to express solidarity on behalf of the country with the armed forces of the country.

He observed that in the war against terrorism, the armed forces and law enforcement agencies had fought so bravely that had never happened across the world.

“Not only me, but the whole nation stands with our trroops. The entire nation has the confidence that terrorists cannot cause any harm to the country,” he maintained.

According to the ISPR, the PM also interacted with tribal elders of the area and acknowledged their unwavering support in the fight against terrorism and facilitating government initiatives that are bringing prosperity and development to Balochistan.

The PM assured the Jirga members of continued sincere support for the timely completion of development projects in Balochistan.

“Development of Balochistan is priority and critical for future of Pakistan,” the PM was quoted by ISPR.

The top leadership of the country was visiting Naushki to honour the Pakistan troops for their success and sacrifices made in a repulsing terror attack in the area.

The armed forces had successfully averted two separate terror attacks in Naushki and Panjgur, Balochistan, on February 2, and completed the clearance operation in the area later on February 5, killing 20 terrorists with the loss of nine precious soldiers, including a junior and senior army official.

With further enter from APP.