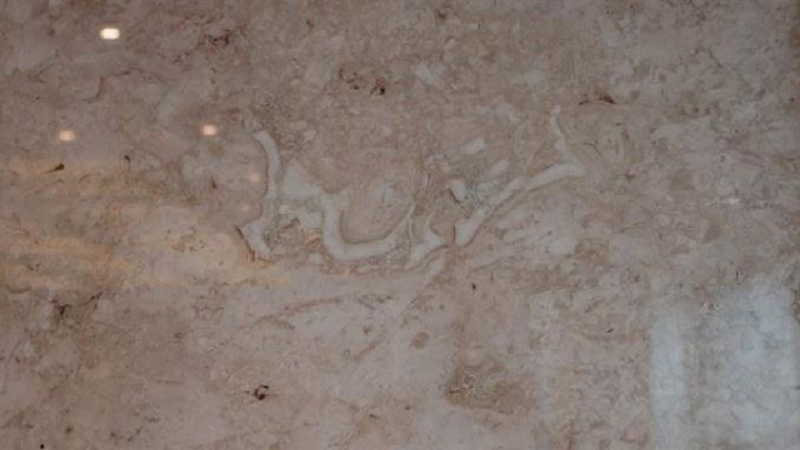 
The marking that appear to form Bismillah, or In the name of Allah, was on a marble slab found in a marble quarry in Turkey’s Mediterranean province of Antalya.

The discovery was made in the marble business area of Antalya Marble Industry and Trade Company in Taskesigi village of the Antalya Korkuteli district.

The figure that appeared on the stone attracted the attention of miners while the stone was being processed in the quarry. Removing dust from the stone, workers noticed the marking appeared to spell “Bismillah” in Arabic letters.

The slab was then sent to Suleyman Demirel University in Turkiye’s southwestern Isparta province for analysis.

Scientists Fuzuli Yagmurlu, Rasit Altindag and Nazmi Sengun made an interesting discovery in their analysis.

While 195 million years old remains were found in the content of the marble, the marking is believed to occur naturally.

Bioclastic remains of fossils belonging to sea creatures that lived 195 million years ago during the Jurassic dinosaurs period were found on dolomitic limestone that formed the plate.

It was also noted that the remains, named after the Jura mountains in the European Alps, are concentrated in parts of the plate.

The report said the figures on the plate with Bismillah were completely “natural” formations and the writings were formed as a result of the fragmentation, deformation and arrangement of the remains of heart-shaped shellfish over time.

According to a scientific report given by Ahmet Ogke, Dean of Akdeniz University Faculty of Theology, the Arabic figures on the marble are the same character as Bismillah which is mentioned in the Holy Quran.