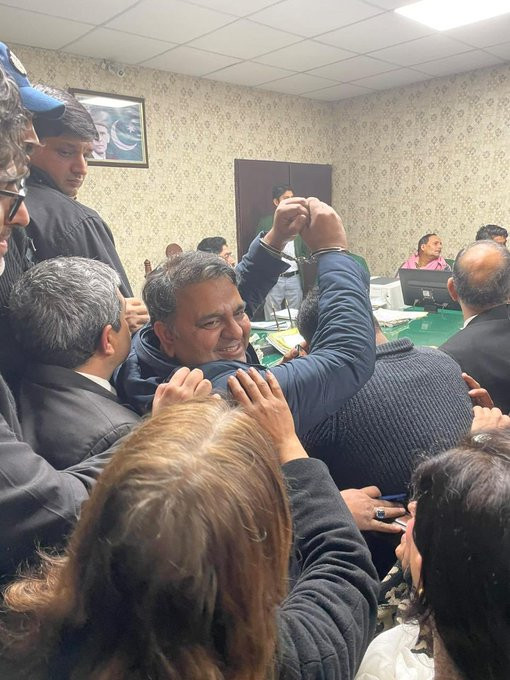 A district and sessions court in the federal capital on Wednesday reserved its verdict on the arrest of Pakistan Tehreek-e-Insaf (PTI) leader Fawad Chaudhry on charges of sedition for “inciting violence against a constitutional institution”.

The PTI leader was arrested in the wee hours of the day from his residence in Lahore. A magisterial court in Lahore Cantt later approved Fawad’s transitory remand to the Islamabad police.

A first information report (FIR) was registered at the Kohsar police station against Fawad on the complaint of Election Commission of Pakistan (ECP) Secretary Umar Hameed, registered under sections 153-A (promotion of enmity between groups), 506 (criminal intimidation), 505 (statement conducing to public mischief) and 124-A (sedition) of the Pakistan Penal Code.

Police later presented him before judicial magistrate Naveed Khan at the district and sessions court in Islamabad’s F-8 area on Wednesday evening, where they asked for an eight day physical remand of the PTI leader.

According to the text of the FIR, during a speech on Tuesday Fawad had said that the status of the ECP is the same as a “secretary”, adding that the “chief election commissioner signs documents like a clerk”.

During the press talk, while strongly criticising the appointment of Mohsin Naqvi as Punjab’s caretaker chief minister the PTI leader had also said that “those who are being appointed as the caretaker of [Punjab] government will be followed until they are punished”.

According to Islamabad police, Fawad tried to ignite violence against the state institutions and aroused the sentiments of the people.

‘No basis for any case against me’

During proceedings before judicial magistrate Naveed Khan at the district and sessions court in Islamabad’s F-8 area, Fawad said that there was no basis for any case against him.

“1,500 policemen are standing outside [the court] and I was handcuffed despite being a lawyer in the Supreme Court,” he said, adding that he had been a federal minister in the past well.

“It is unfortunate that we are taking revenge against each other in politics,” he said. Fawad requested to dismiss the case against him, arguing that if the case continues, free speech would end in the country.

The lawyer for the Election Commission of Pakistan (ECP) and Fawad Chaudhry’s counsels both gave their arguments during the proceedings.

The PTI leader was produced in the court in handcuffs, the removal of which was requested by the lawyer.

“I never gave a speech but was addressing a media talk during which I was misquoted. I am the spokesperson of the PTI and whatever I say is the party’s policy. It is not necessary that what I say is my own personal opinion,” he argued.

The PTI leader said that he was not threatening the ECP members or their families, saying that he was merely “explaining” the matter.

Fawad said that he was arrested by Lahore police, not the Islamabad police, who have his mobile phone in their possession. He questioned why he was kept detained at a Counter-Terrorism Department (CTD) facility as he was not a terrorist.

The ECP lawyer, during his arguments, said that the commission was a constitutional institution and had all the power to conduct elections in the country.

“The ECP is being targeted under a well-thought-out plan and the purpose of Fawad’s speech was to incite people,” he said.

He criticised Fawad for targeting the families of the ECP members, saying that the PTI leader was promoting hatred against the institution.

The lawyer said that the people behind the speech also needed to be identified, adding that there was sufficient evidence in the media against the PTI leader.

The court later reserved the verdict on the police’s request for the physical remand.