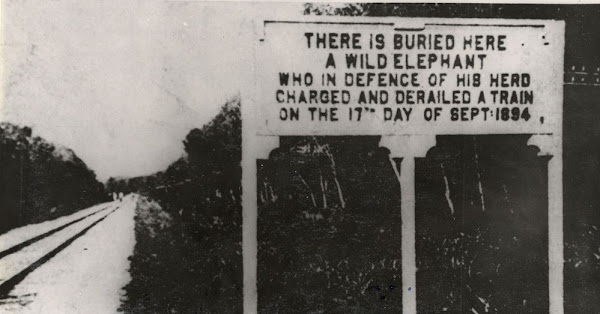 Elephants are reputed to have a great memory. They are also reputed to never forgive.

There have been tales where elephants have sought revenge against humans for acts of cruelty. Not long ago, in the Indian state of Chhattisgarh, a herd of some forty elephants stormed into a village and trampled a man for killing a calf earlier in the week. 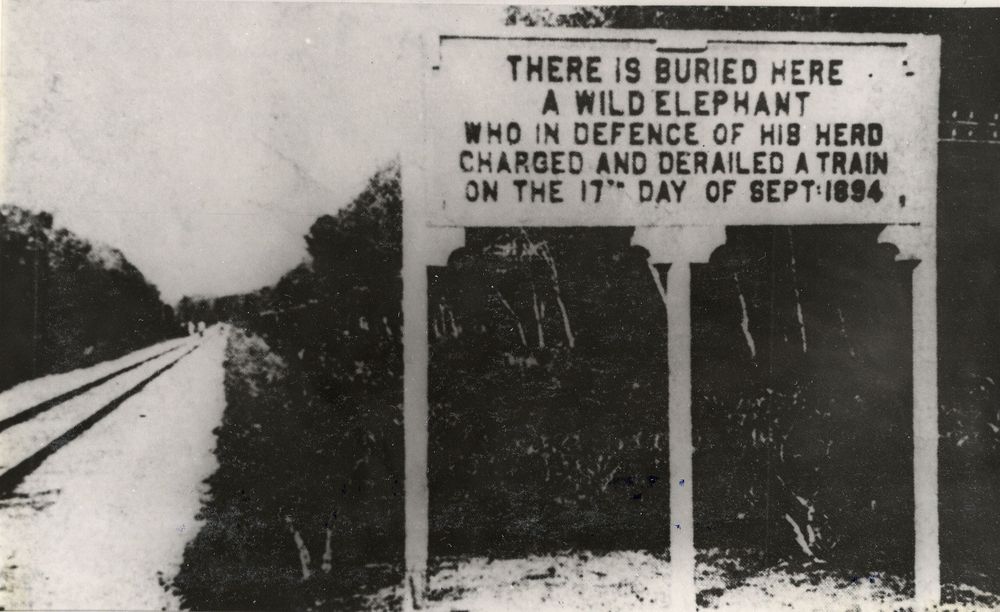 In Uganda, there have been many cases where wild elephants have attacked villagers and destroyed houses, which scientists believe may have been acts of revenge over poaching incidents conducted 20 to 30 years ago. Scientists suspect that the trauma of witnessing the death of family members, or being rendered orphans at a young age had caused the elephants to suffer the equivalent of post-traumatic stress disorder. The lack of maternal care and an older guardian may have created a generation of “teenage delinquent” elephants that have been creating havoc in African villages.

Another story of an elephant exacting revenge upon humans comes from Malaysia. The incident took place more than a hundred years ago. At that time the Southeast Asian country was still teeming with wildlife and tropical jungle, and elephants roamed freely in what is now a large town in Hilir Perak District.

In 1885, the railways were built by the British to transport tin from mines in the hinterland of the West Coast states of Peninsular Malaysia to coastal ports. The first railway line was between Port Weld and Taiping, which lies at the heart of the tin-rich Larut Valley in Perak state. A year later, in 1886, the line was expanded to connect Lumpur and Klang. In 1893, the line between Teluk Anson (now called Teluk Intan) to Tapah Road was opened. 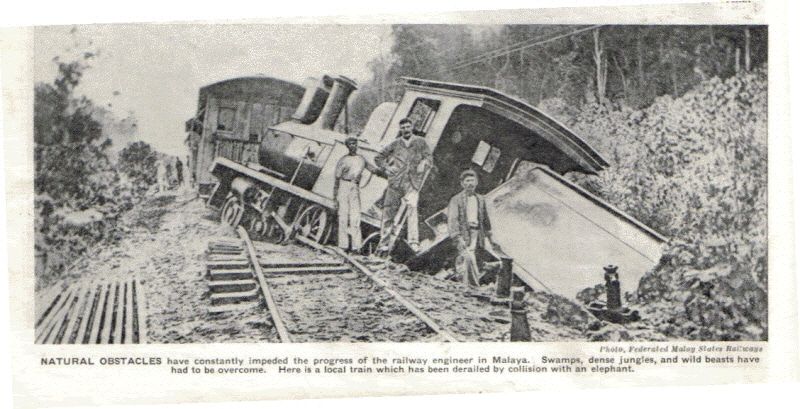 A year later, in 1894, a baby elephant was struck down by a train in Teluk Anson killing the animal. The next day (or probably a few days later), on 17 September 1894, a steam train pulling three passenger carriages, carrying merchants and mine workers, were returning from Perak, when the driver of the train noticed a large male elephant standing defiantly on the tracks, facing the incoming train. The incident happened at dusk and the scene was dark because it was located in a forest area. The driver sounded the horn, but the elephant wouldn’t move. Instead, it charged straight into the iron horse, derailing the train and killing two passengers. The elephant itself didn’t survive the attack.

The British government was so moved by this wild elephant’s actions that they set up an Elephant Memorial by the line at the very spot where the incident took place. The line was discontinued during World War 2 and was removed.

The skull of the male elephant is now kept in the Taiping Museum, Perak, and its femur which measured almost 1 meter in height is kept in the Keretapi Tanah Melayu Bhd (KTMB) Museum in Johor Baru, while its tusks are understood to have been taken to England. The rest of the carcass was buried at the memorial site. 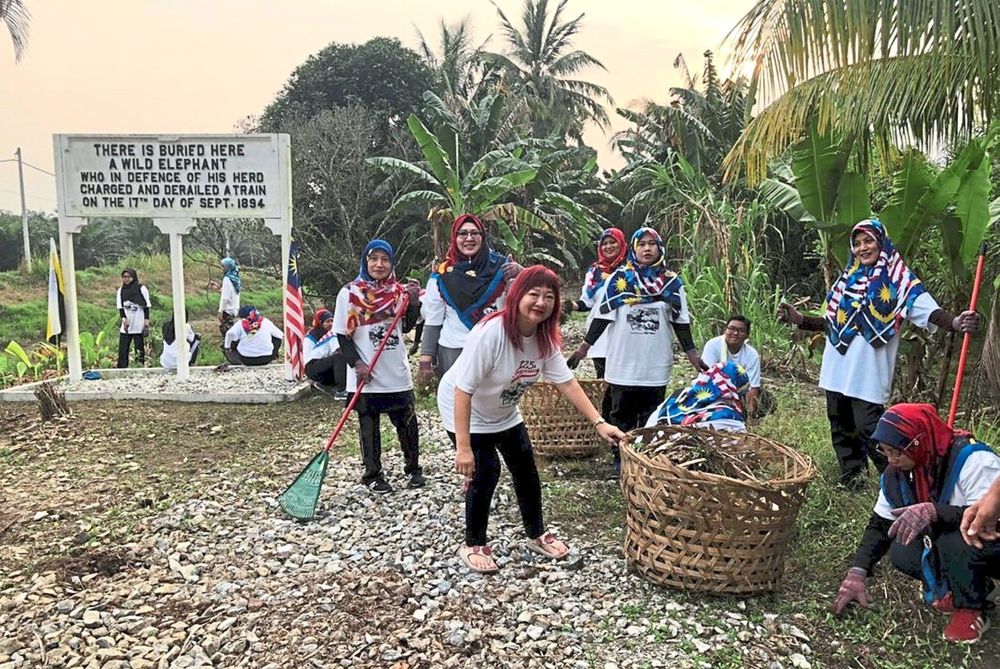 Volunteers cleaning up the Elephant Memorial in Teluk Intan. Photo: The Star 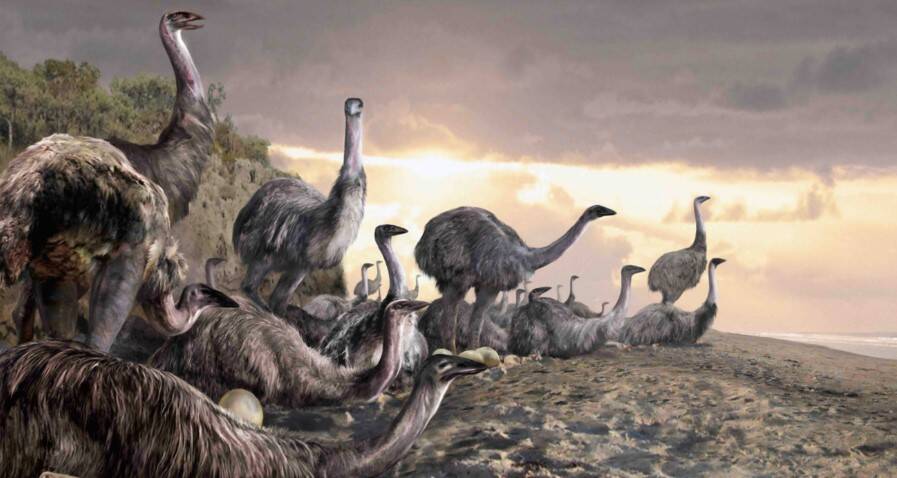 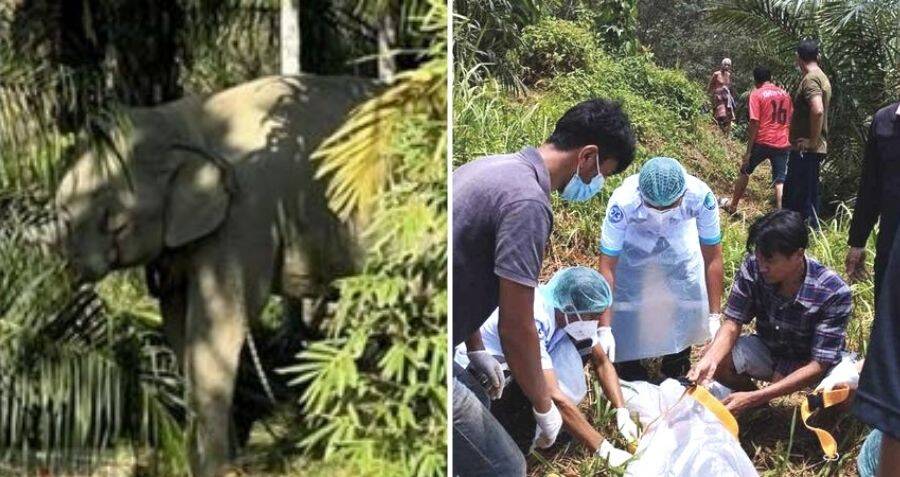 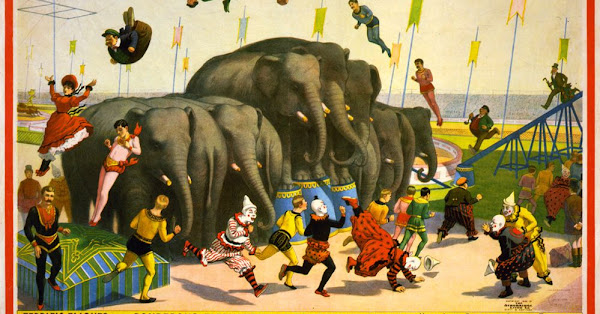