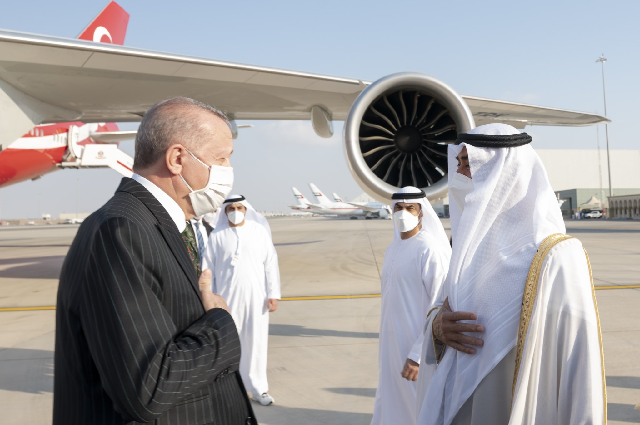 Turkey’s President Recep Tayyip Erdogan on Monday visited the United Arab Emirates for the first time in nearly a decade, to revive relations that were long strained by regional disputes.

He was greeted in the capital Abu Dhabi by Crown Prince Sheikh Mohammed bin Zayed Al-Nahyan, the UAE’s de facto ruler, who had travelled to Ankara in November on the first high-level visit to Turkey since 2012.

I was pleased to welcome Turkish President Recep Tayyip Erdogan to the UAE today. We discussed opportunities to strengthen our bilateral relations and witnessed the signing of several agreements and MOUs aimed at expanding cooperation between our two countries. pic.twitter.com/ICQ8UIi21Y

That trip “marked the beginning of a new era in relations,” Erdogan said at Istanbul airport before leaving for his two-day visit. “We are planning to take steps that will bring relations back to the level they deserve.”

Ties had been strained as Turkey and the oil-rich Emirates backed opposing sides in the Libyan civil war and sparred over issues such as gas exploration in the eastern Mediterranean.

Relations were particularly tense after Saudi Arabia, the Emirates and Bahrain in 2017 cut all links with Qatar, a close ally of Ankara. Those relations were restored in January 2021.

The Turkish president’s UAE visit is his first since 2013, when he was prime minister, and his first as head of state.

To greet Erdogan on his trip — which will take him to the Expo 2020 Dubai world fair Tuesday — the host country lit up the world’s tallest building, Burj Khalifa, in the red and white of the Turkish flag.

Burj Khalifa’s LED-illuminated facade is lighting up with the colours of the Turkish flag and the Turkish national anthem playing in the background ahead of the arrival of Türkiye’s president Erdogan in Dubai, UAE pic.twitter.com/moN0tkzzai

Edogan and Sheikh Mohammed discussed opportunities for cooperation, particularly in the economic and development fields, and the latest regional developments, said the official WAM news agency.

The crown prince said the UAE was keen to cooperate with Turkey “to confront a number of common challenges that the region is witnessing” through dialogue and diplomatic resolve.

The Emirates faces a growing threat from Yemen’s Iran-backed Huthi rebels, who have launched several drone and missile attacks on the Gulf country, prompting stepped up UAE defence cooperation with the United States and France.

Erdogan said in a weekend op-ed in the Emirati English-language daily Khaleej Times that “Turkey and the UAE together can contribute to regional peace, stability and prosperity”.

Following Sheikh Mohammed’s visit in November, the UAE announced a $10 billion fund for investments in Turkey, where the economy has been reeling and inflation last month surged to a near 20-year high.

During this visit, Erdogan was expected to sign 12 agreements with UAE partners, ranging from media and communications to economic and defence deals, Turkish media reports said.

His trip “will open a new, positive page in bilateral relations,” Anwar Gargash, adviser to the UAE president, said in a tweet.

UAE Economy Minister Abdulla bin Touq Al Marri said his country considered economic cooperation in various areas, including defence, an integral part of its strategy and vision of the future.

“I believe that this is a vision shared by both the UAE and Turkey, and the UAE is keen to expand its partnership with Turkey in various vital fields in addition to the defence sector,” he told state news agency Anadolu in remarks published Monday.

The Turkish president in his op-ed also said he wanted to work more closely with the UAE on several fronts, including tackling “climate change, water and food security”.

Erdogan has since last year sought to improve ties with regional powers in the face of increasing diplomatic isolation that has caused foreign investment to dry up, particularly from the West.

Turkey-UAE trade topped 26.4 billion dirhams ($7.2 billion) in the first half of 2021. The UAE hopes to double or triple trade volume with Turkey, which it sees as a route to new markets.

Deadlier than COVID-19? This virus cannot be killed by hand sanitiser