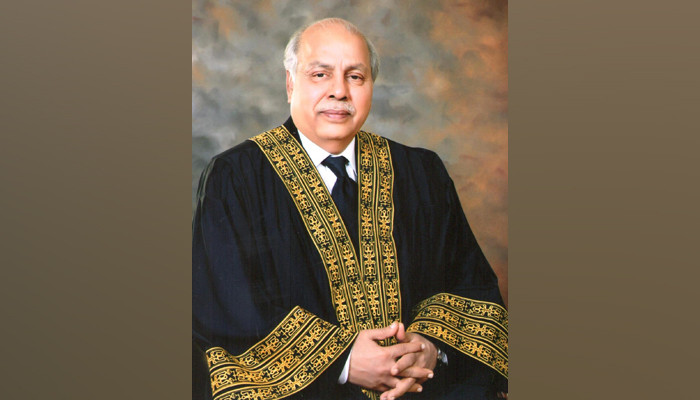 On the Supreme Court (SC) Registrar’s request, the Ministry of Interior on Friday consented to the provision of foolproof security to ex-chief justice of Pakistan Gulzar Ahmed.

The SC Registrar had written a letter to the Interior Ministry, seeking security for ex-CJP Gulzar Ahmed.

Responding to the letter, the Interior Ministry issued a statement saying that security is not being withdrawn from the former top judge.

“Retired Justice Gulzar Ahmed will continue to have the same security as he did while holding the chief justice of Pakistan’s position,” the Interior Ministry said.

The SC official had stated in his letter that the former CJP has given verdicts in many high-profile cases including terrorism, extra-judicial killings, encroachments and minority rights.

The official stated that the security provided to Justice (retd) Gulzar Ahmed as the chief justice should be maintained.

Rangers must be deployed for the former CJP’s security even after his retirement, the Registrar said in the letter written on January 27, just four days before his retirement on February 1.

It is worth mentioning here that Justice Gulzar Ahmed retired after serving in the top judicial position for more than two years. Justice Ahmed assumed office on December 21, 2019, replacing ex-CJP Justice Saqib Nisar.

Justice (retd) Gulzar Ahmed had taken suo moto notice of several issues related to the minorities including an attack on a Hindu temple in Karak.

Being apolitical is the only option