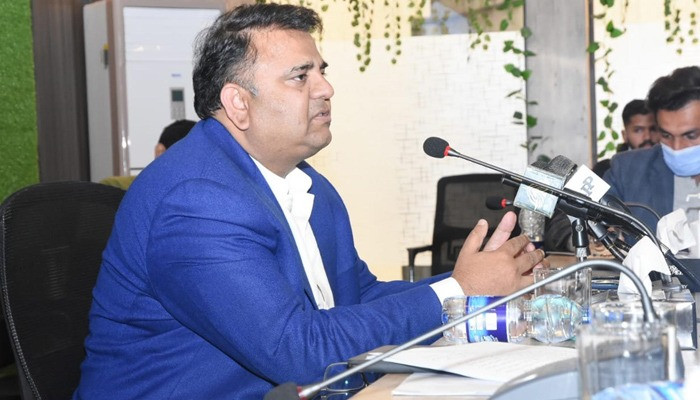 ISLAMABAD: Information Minister Fawad Chaudhry said on Tuesday that there is “no doubt” that the prices of petroleum products will increase.

Addressing a press conference following a cabinet meeting in Islamabad, Fawad said that the price of petroleum products is not the cabinet’s decision and is dependent on other factors.

The information minister also announced that in line with Prime Minister Imran Khan’s announcement, the federal cabinet has approved a 15% increase in the salaries of the civil armed forces and 15% disparity allowance for federal employees from grade one to 19.

The minister said that the Federal Board of Revenue (FBR) could not recover Rs3,000 billion due to ongoing cases in courts.

“FBR is unable to recover money due to stay orders,” Fawad said, clarifying that the PTI-led government respects all institutions and works together with them.

$725m received for procurement of vaccines

Speaking about the provincial vaccine dilemma, Fawad said that the Sindh chief minister had asked the federal government to import vaccines for them.

“Sindh government has not even spent a single dollar on vaccines and all vaccines were provided by the federal government,” he said, adding that despite being provided with vaccines the number of people vaccinated in Karachi is very less compared to other major cities of the country.

He further added that $725 million have been received from international institutions for the purchase of vaccines, stating that vaccines worth $2.5 billion have already been administered to people.

Fawad also shared that the cabinet has approved the formulation of a separate judicial system for overseas Pakistanis for summary trial.

These laws will be enacted in view of PM Imran Khan’s vision to facilitate overseas Pakistanis, who are a precious asset of the country, Fawad said, adding that similar judicial system will also be established in Khyber Pakhtunkhwa and Punjab, where PTI is in power.

He said that the cabinet meeting gave its nod to the country’s first-ever digital cloud policy.