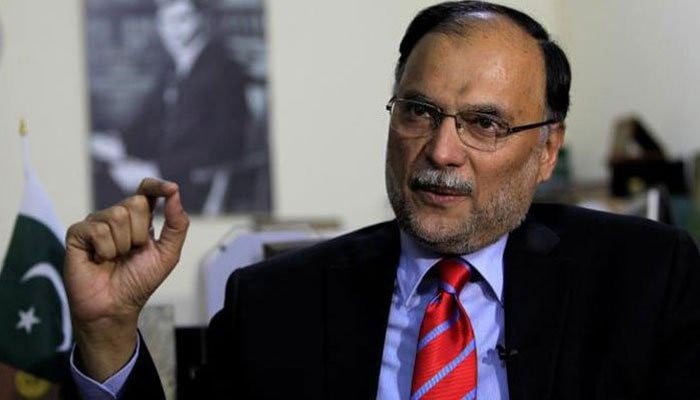 PML-N Secretary-Common Ahsan Iqbal has claimed that 5 federal ministers of the ruling celebration are in contact with him, including that they’re “even ready to leave the PTI.”

Talking throughout Geo Information Programme “Aaj Shahzaib Khanzada Kay Saath” on Thursday night, the previous inside minister mentioned that “those in the government who taunt us today will be the first to jump ship as soon as they get a chance.”

Ahsan additional claimed that 5 ministers of the incumbent authorities are in contact with PML-N and able to give up the PTI.

He went on to say that upon the assure of getting a celebration ticket in the following basic elections, PTI ministers are prepared to go away the ruling celebration.

The PML-N chief mentioned that authorities is in its “sunset phase,” including that “these people don’t want to ruin their political future.”

“There is chaos in the PTI and people are ready to leave as the ruling party’s ship is sinking,” he added.

Speaking about conferences with authorities allies, Ahsan mentioned that if the federal government allies don’t assist the Opposition’s vote of the no-confidence, the Pakistan Democratic Motion (PDM) will attain Islamabad on March 23 with “full force” and thru individuals’s referendum, the Opposition will show that the plenty have misplaced individuals’s belief.

The PML-N secretary-general lashed out at Prime Minister Imran Khan for mocking PPP chairman Bilawal-Bhutto’s Urdu and mentioned: “How unfortunate that despite being surrounded by economic turmoil and security challenges, our PM is behaving like a clown and ridiculing others by making a mockery of them.”

“Are you a prime minister or running a circus?” he questioned.

Ahsan mentioned that with this “non-serious attitude and egoistic nature, you can drive the country towards destruction but can’t address the challenges.”

“The country desperately needs leadership that can get everyone on board to discuss economic issues,” he added.

PTI lawmakers are prepared to leap ship due to failure

On Thursday PML-N Vice-President Maryam Nawaz had additionally mentioned that PM Imran Khan is popping his weapons on the Opposition as he’s conscious that his celebration’s lawmakers are “ready to jump ship” due to his “failures”.

The PML-N chief mentioned the prime minister was not “tenable” for anybody anymore, as she claimed the premier was conscious that his “ship is in the storm”.

“It’s my honest opinion: wear a helmet whenever you go to meet the people,” Maryam advised PM Imran Khan, including: “People will collar you, so be careful from now on.”