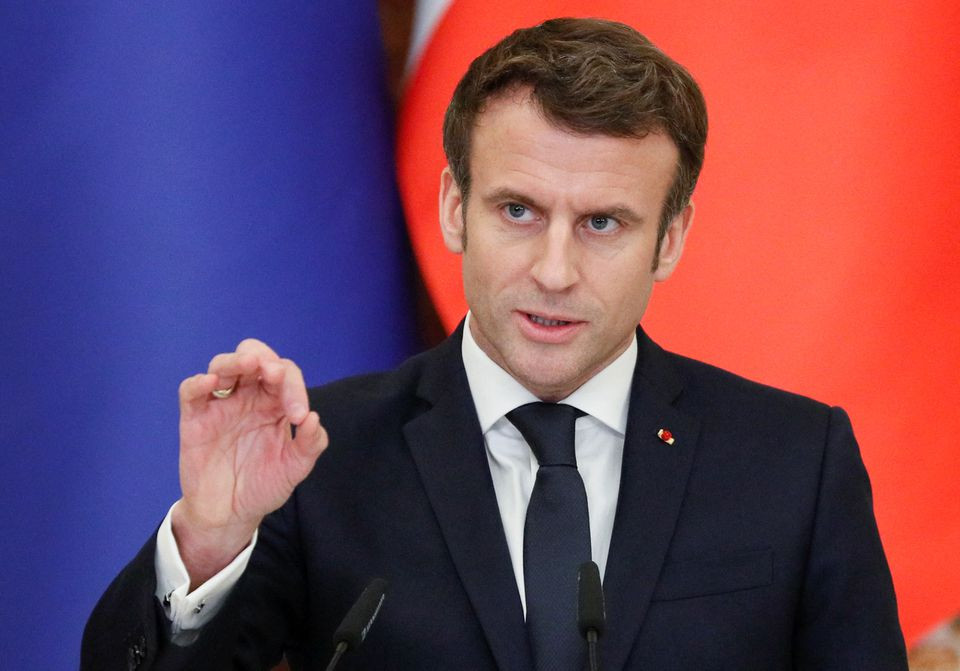 
French President Emmanuel Macron, the first leader of a major Western power to meet Vladimir Putin since Russia massed troops near Ukraine, said on Tuesday he believed steps can be taken to de-escalate the crisis and called on all sides to stay calm.

Macron, who in contrast to the US and British leaders, has played down the likelihood that Russia may soon invade its neighbour, shuttled from Moscow to Kyiv on Tuesday in a bid to mediate a settlement and avoid war.

The French president had no breakthroughs to announce but Macron said he thought his talks had helped prevent the crisis from escalating further. He said had never expected “for one second” that Putin would make concessions.

Putin and Ukrainian President Volodymyr Zelenskiy had told him they were committed to the principles of a 2014 peace agreement, he said, adding that this deal, known as the Minsk accords, offered a path to resolving their ongoing disputes.

“This shared determination is the only way allowing us to create peace, the only way to create a viable political solution,” Macron told a joint news conference with Zelenskiy.

“Calm … is essential from all parties in words and in deeds,” Macron said, praising Zelenskiy for the “sangfroid” he and the Ukrainian people were showing as Russia amasses more than 100,000 troops, tanks and heavy weapons on Ukraine’s borders.

Zelenskiy made clear he was sceptical of any assurances Macron may have received from Putin. “I do not really trust words, I believe that every politician can be transparent by taking concrete steps,” he said.

Moscow denies any plans to invade but is seeking sweeping concessions from the North Atlantic Treaty Organization, the military alliance which has underpinned security in western Europe since 1949.

The demands include a promise of no missile deployments near Russia’s borders, a scaling back of NATO infrastructure and a ban on Ukraine ever joining the alliance.

Russia’s military build-up gained momentum on Tuesday with the arrival of three warships in the Black Sea, according to a Reuters witness. Turkish sources said another three were expected to pass through the Bosporus on Wednesday, in what Russia’s Interfax news agency reported as a pre-planned exercise. read more

Macron flew later to Berlin for meetings with German Chancellor Olaf Scholz. In a statement alongside Macron before the talks began, Scholz told reporters: “Our common goal is to prevent a war in Europe.”

“Our appraisal of the situation is united, as is our position on this: any further attack on the sovereignty and territorial integrity of Ukraine is unacceptable and will draw wide-reaching consequences for Russia – politically, economically and geo-strategically,” he added.

Macron and Scholz also met in Berlin with Polish President Andrzej Duda. The French presidency said after the talks the three leaders expressed their joint support for Ukrainian sovereignty.

The meeting further illustrated the European convergence on a “committed and demanding approach” toward Russia, the French presidency added.

NATO chief Jens Stoltenberg, asked in an interview with CNN about the likelihood of a Russian invasion, said: “There’s no certainty but what we see is a continued military buildup with more and more forces… The warning time is going down and the risk of an attack is going up.”

WESTERN FEARS OF AN INVASION

The United States and European Union have threatened Russia with sanctions if it attacks Ukraine. Moscow, still Europe’s biggest energy supplier despite already being under sanctions since seizing Ukraine’s Crimean peninsula in 2014, has largely dismissed new sanctions as an empty threat.

US President Joe Biden warned on Monday that if Russia invaded Ukraine, “there will be no longer Nord Stream 2″, referring to a newly built, as yet unopened gas pipeline to Germany. He did not specify how he would halt it.

While Western countries have stood together to back Ukraine, they disagree about the likelihood of war.

French officials have suggested they think Washington has overstated the threat, and Kyiv has also played down the likelihood of a large-scale invasion.

Macron, who is expected to stand for re-election in April, said before he left on his trip to Moscow that he believed Russia did not have designs on Ukraine but wanted to renegotiate European security arrangements.

But whatever Moscow’s true aims, Western countries say they cannot safely assume the crisis will end without war unless Russia pulls back its troops.

The European Central Bank is preparing banks for a possible Russian-sponsored cyber attack as tensions with Ukraine mount, two people with knowledge of the matter said, as the region braces for the financial fallout of any conflict. read more

Taliban warns US, says group was not aware of al Qaeda leader’s presence in Kabul