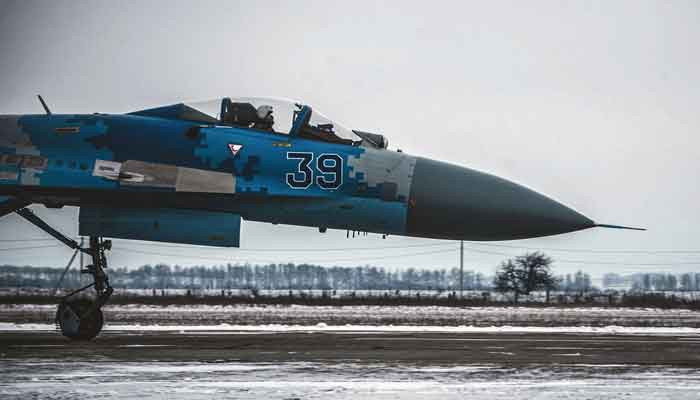 KYIV: German Chancellor Olaf Scholz lands in Kyiv on Monday before visiting Moscow to try to head off a “very critical” threat of a Russian invasion that could spark the worst crisis since the Cold War.

The German leader visits the two capitals in reverse order from that taken last week by French President Emmanuel Macron in his bid to quiet the drumbeats of war echoing across eastern Europe.

Russian President Vladimir Putin has surrounded Ukraine from nearly all sides with more than 100,000 soldiers in a high-stakes standoff with the West over NATO’s post-Soviet expansion into countries once under the Kremlin’s domain.

The West has remained united and defiant in the face of Putin’s demands for binding security guarantees that would see NATO roll back its forces and rule out Ukraine’s potential membership of the alliance.

But US intelligence officials worry that weeks of crisis talks have given Russia the time to prepare a major offensive — should Putin make the ultimate decision to attack Ukraine.

Washington reaffirmed its warning Sunday that Russia was now ready to strike at “any moment” with an assault that would likely start with “a significant barrage of missiles and bomb attacks”.

US officials said Biden and Zelensky had “agreed on the importance of continuing to pursue diplomacy and deterrence” in their call.

The Ukrainian presidency said Zelensky had also urged Biden to visit Kyiv “in the coming days” in a show of moral support.

The White House made no mention of the invitation in its readout of the 50-minute call.

But Germany’s Scholtz sounded firm in his resolve to support Ukraine and hit Russia “immediately” with punishing sanctions if it went to war.

“In the event of a military aggression against Ukraine that threatens its territorial integrity and sovereignty, that will lead to tough sanctions that we have carefully prepared and which we can immediately put into force,” Scholz said on the eve of his departure.

Germany and France both play a central role in mediation efforts around the gruelling conflict in Ukraine’s Russian-backed separatist east that has claimed more than 14,000 lives.

But Germany’s close business relations with Moscow and heavy reliance on Russian natural gas imports have been a source of lingering concern for Kyiv’s pro-Western leaders as well as Biden’s team.

Scholz has warned Russia it should “not underestimate our unity and determination” but also hedged against unequivocally backing Biden’s pledge to “bring an end” to Russia’s new Nord Stream 2 gas link to Germany.

Kyiv is also upset with Berlin for not having joined some of its NATO allies in beginning to supply weapons to Ukraine.

Scholz’s visit to Moscow on Tuesday will be clouded by a spat involving the tit-for-tat closures of the German-language channel of Russia’s RT network and the Moscow bureau of Germany’s Deutsche Welle.

British Prime Minister Boris Johnson will also “travel to Europe” to address the crisis towards end of the week as part of the European push for peace, his office said Sunday.

The diplomatic push comes as Western countries withdraw staff from their Kyiv embassies, with many of them urging their citizens to leave immediately.

But departures may be complicated by the looming threat of the skies over Ukraine closing due to rising risks for airlines.

The Dutch carrier KLM became the first major airline over the weekend to indefinitely suspend flights to Kyiv.

Ukraine’s budget airline SkyUp said its flight from Portugal to Kyiv was forced to land in Moldova Sunday after the plane’s Irish leasing company revoked permission for it to cross into Ukraine.

SkyUp added that European leasing companies were demanding that Ukrainian airlines return their planes to EU airspace within 48 hours.

Industry analysts believe other international airlines may soon also ban flights into Ukraine because of the growing cost to insurers.

The travel industry is still haunted by the memory of Malaysia Airlines flight MH17, shot down while flying near eastern Ukraine’s conflict zone in July 2014.

All 298 passengers and crew on board the Amsterdam-Kuala Lumpur flight were killed.

The diplomatic drawdown has also touched the staff of the Organization for Security and Co-operation (OSCE) monitoring mission in Ukraine.

The mission said “certain participating states” had asked their staff to leave Ukraine “within the next days”.

But it stressed that its mission continued in 10 cities throughout the country.