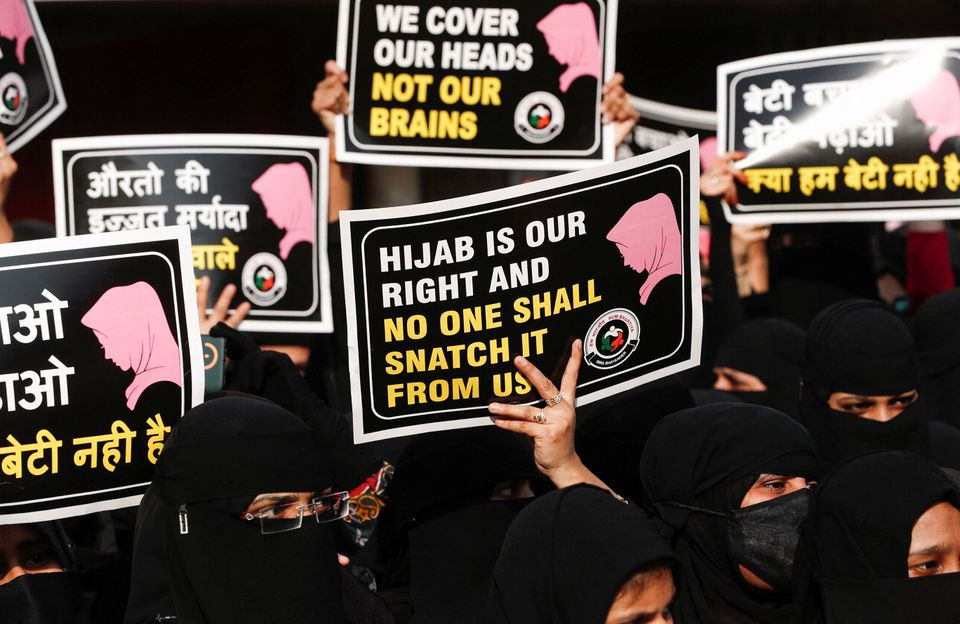 Ayesha Imthiaz, a devout Indian Muslim who considers wearing a hijab an expression of devotion to the Prophet Mohammad (PBUH), says a move by her college to expel hijab-wearing girls is an insult that will force her to chose between religion and education.

“The humiliation of being asked to leave my classroom for wearing a head scarf by college officials has shaken my core belief,” said the 21-year-old student from southern Karnataka’s Udupi district, where protests over the head covering ban began.

“My religion has been questioned and insulted by a place which I had considered as a temple of education,” she told Reuters.

“It is more like telling us you chose between your religion or education, that’s a wrong thing,” she said after studying for five years at the Mahatma Gandhi Memorial college in Udupi.

Several Muslim girls who protested the ban had received threatening calls and were forced to stay indoors, she added.

College officials say students are allowed to wear the hijab on campus and only asked them to take it off inside the classroom.

Udupi is one of three districts in Karnataka’s religiously sensitive coastal region, which is a stronghold of Prime Minister Narendra Modi’s right-wing Bharatiya Janata Party (BJP).

The stand-off has increased fear and anger among minority Muslims, who say the country’s constitution grants them the freedom to wear what they want. Protests over the ban have escalated, with hundreds demonstrating this month in Kolkata and Chennai.

Muslim women protest outside a college in Hyderabad India against discriminatory dress code regulations that forbid them from adorning the hijab, making it an obstacle in their journey to pursue higher education in India.

Last week, a judge at the state’s high court referred petitions challenging the ban to a larger panel.

The issue is being closely watched internationally as a test of religious freedom guaranteed by the Indian Constitution.

The US Office of International Religious Freedom (IRF) on Friday said the hijab bans “violate religious freedom and stigmatise and marginalise women and girls.”

In response, India’s foreign ministry on Saturday said outside comments over internal issues were not welcome and the matter was under judicial review.

Imthiaz and six other Muslim girls protesting the ban say they are determined to fight for their religious freedom in the face of some hardline Hindu students and even some of their friends.

“It is really hurtful to see our own friends going against us and telling ‘I have a problem with you wearing the hijab’…its affected our bonds and mental health,” Imthiaz said.