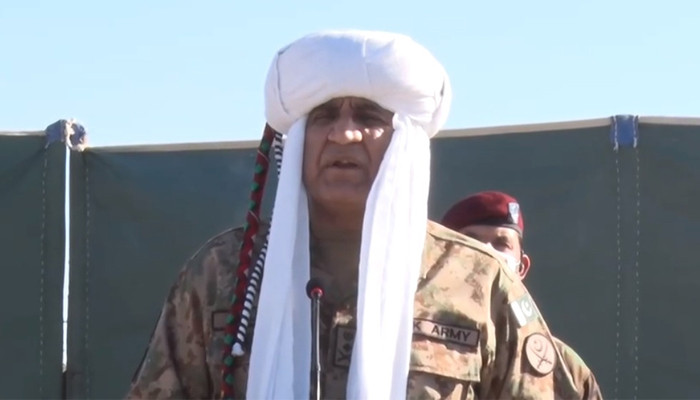 Chief of Military Workers (COAS) Common Qamar Javed Bajwa urged on Saturday that it’s “imperative” to break the “nexus between terrorists and their sympathisers and support base” to defeat terrorism, stated the army’s media wing.

In accordance to the Inter-Providers Public Relations (ISPR), the military chief handed the remarks whereas interacting with the notables and tribal elders of Panjgur.

In his interplay, the COAS lauded the tribal elders for his or her assist to regulation enforcement businesses within the battle in opposition to terrorism.

“Breaking nexus between terrorists and their sympathisers and support base is imperative for defeating terrorism,” COAS reiterated. The elders of the world had been additionally assured of the military’s “all-out support for creating” an atmosphere for prosperity and growth within the space, notably within the “timely completion of ongoing socio-economic projects”.

“Terrorists will not be allowed to reverse the hard-earned gains irrespective of the challenges,” stated Gen Bajwa.

The military chief was in Panjgur on a day-long go to to spend time with the troops that repulsed a terrorist assault in Panjgur on February 2.

Throughout the go to, Gen Bajwa was given a “detailed update by the local commander on the security situation in the area and response mechanism to effectively check emerging threats”.

Whereas addressing the troops, the military chief lauded the professionalism and the efficient response of the bottom troops within the current terrorist actions.

“COAS emphasised on maintaining high standards of operational readiness to fail hostile efforts to destabilise Balochistan and ensure safety and security of the local population,” stated the ISPR. He additionally paid tribute to the martyrs for his or her supreme sacrifice within the line of obligation for the defence of the motherland.

Earlier this month, the ISPR stated that as many as 20 terrorists had been killed within the Panjgur and Naushki operations after the safety forces accomplished a clearance operation.

“A total of 20 terrorists were killed during Panjgur and Naushki operations. Security forces have completed the clearance operation today,” the ISPR stated in an announcement.

The army’s media wing stated the terrorists had attacked safety forces’ camps at Naushki and Panjgur late night on February 2. Each the assaults had been “repulsed successfully by prompt response from troops” at each areas, it added.

In Naushki, 9 terrorists had been killed, whereas 4 safety forces personnel, together with an officer, embraced martyrdom through the shoot out, the ISPR stated. In Panjgur, safety forces repulsed the terrorist assault after an intense trade of fireside and terrorists fled from the world, it added.

The army’s media wing shared that the safety forces carried out a clearance operation to seek out the hiding terrorists within the space after the assault on February 2.

Throughout the operation, 5 troopers, together with a junior commissioned officer, had been martyred and six troopers had been injured within the follow-up operations at Panjgur that lasted 72 hours.

The ISPR stated three terrorists linked to the assaults had been killed on Friday, together with the 2 high-value targets at Balgatar in Kech within the operation that was performed at a “makeshift terrorist hideout”.

“Our security forces stand firm and resolutely committed to eliminating the menace of terrorism from our soil no matter what the cost,” vowed the ISPR.

Sharjeel Memon to be inducted into Sindh cabinet

BHC issues notice to govt over plea against PECA