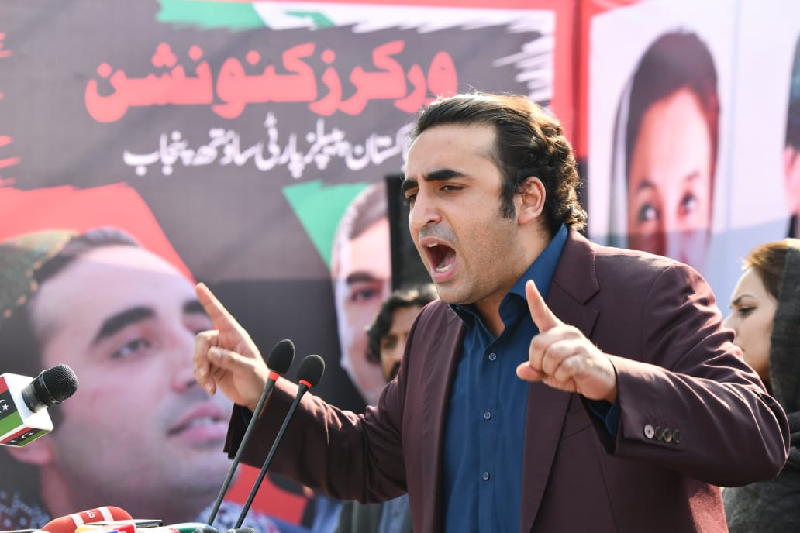 
PPP Chairman Bilawal Bhutto Zardari on Thursday maintained that Prime Minister Imran Khan’s mantra of “eradicating corruption” had lost all its credibility the same way as that of his” mentor”, former military ruler Gen Pervez Musharraf.

“Imran Khan will face a fate similar to that of General Musharraf,” Bilawal told a charged crowd at PPP activists’ convention in Multan.

The PPP chairman challenged the premier to arrest him and his father, party co-chairperson Asif Ali Zardari, as well as his sister, Aseefa Bhutto Zardari, if he had the courage as they were all in the country.

He claimed that his grandfather Zulfikar Ali Bhutto, his mother Shaheed Mohtarma Benazir Bhutto and father Zardari were exonerated in “fake corruption cases”.

The scion of the Bhutto dynasty claimed that PM Imran had committed a great injustice to Multan by not awarding a certificate to Foreign Minister Shah Mahmood Qureshi, who hailed from the city, while distributing performance certificates among his “lackeys”.

“On one hand, the government boasts about a successful foreign policy and the recent Chinese visit but on the other, deprives the foreign minister of a certificate.”

Bilawal said the central executive committee of his party had announced a war against this “incapable, selected and puppet” government.

“Every activist of the party is a soldier in this war,” he added.

The PPP chairman said his party had kicked off its protests all over the country on all issues including the petrol, gas, sugar and urea crises.

“The PPP held a farmers and tractor march for the rights of the growers, who provide food security to the country.”

He said the march through which the premier would be held responsible for the economic woes of the people would begin on February 27 from Karachi and make its way towards Islamabad.

He instructed the party activists to take his message to former workers and supporters that the son of Benazir Bhutto had come out on the streets to save the country and change its fate.

Bilawal said the PPP’s long march would pass through the entire country.

“We will inform the people that the Transparency International has declared this selected government the most corrupt in the history of the country. Every corrupt of the country is sitting next to [PM] Imran.”

The PPP chairman claimed that the premier had given a certificate to the minister who had halted the China-Pakistan Economic Corridor (CPEC) project.

Bilawal claimed that PM Khan had expressed his lack of confidence in all the ministers in his “huge” cabinet.

“The people are bearing the brunt of his ‘incapable’ cabinet. Enough is enough.”

Bilawal said the success of the long march was already apparent to all. “One of Imran’s friends has been disqualified,” he said, referring to former party minister Faisal Vawda.

“Now the government’s allies are also changing their views. We will pass through the constituencies of the allies and tell them the verdict of the people. We will expose every facilitator of Imran Khan on the way to Islamabad. When we bring the no-confidence motion [in parliament], the world will see who is with him and who is not.”

Alluding to PML-N, Bilawal said the former friends had a change of heart over the no-confidence motion.

He said with their march “people would give their vote of no-confidence”.