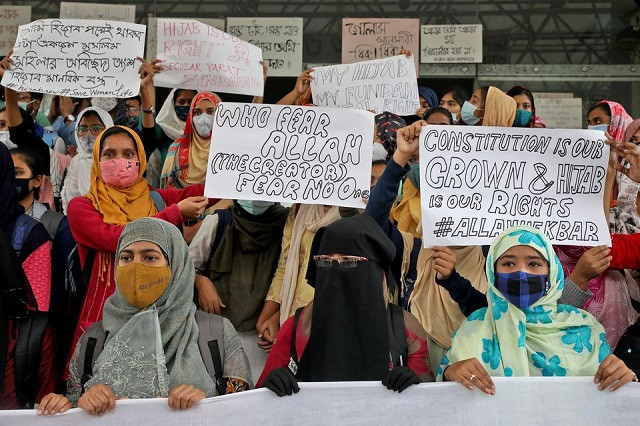 An interim order passed by a court in India’s southern Karnataka state advised the students against wearing “religious garments” until it announces final verdict on petition filed against colleges barring Muslim students from wearing hijab.

The Karnataka High Court on Thursday said that the matter would be heard again on Monday to decide if schools and colleges can order students not to wear the hijab in classrooms, according to India’s NDTV.

“These matters give rise to certain constitutional questions of seminal importance in view of certain aspects of personal law,” the judge hearing the case was quoted as saying while referring it to a panel of judges to be led by the chief justice of the Karnataka High Court.

However, the counsel for the petitioners objected to the interim order, saying it amounts to “suspension of our rights”, reported The Wire.

The stand-off in Karnataka state has galvanised fears among the minority community about what they say is increasing persecution under the Hindu nationalist government of Prime Minister Narendra Modi.

The state machinery seems to be helpless before the saffron scarf group. Instead, some ruling party members are issuing statements to defend the ban on hijab which encouraged the RSS members to provoke the situation.

In one incident in a video widely shared online, a lone Muslim student wearing the hijab is surrounded by Hindu male youths shouting religious slogans while trying to enter her school in Karnataka.

The protesting students in Kolkata on Wednesday were predominantly women wearing hijabs, a Reuters eyewitness said, adding the demonstrations were without incident. The students told Reuters that they plan to reconvene on Thursday.

“We will keep protesting until the government stops insulting the students,” said Tasmeen Sultana, one of the protestors. “We want our fundamental rights back…you cannot take away our rights.”

Protests have also been planned for Wednesday in India’s capital New Delhi.

The government of Karnataka, where 12% of the population is Muslim and which is ruled by Prime Minister Narendra Modi’s Hindu nationalist Bharatiya Janata Party (BJP), has said in an order that students should follow dress codes set by schools.

Man punches girlfriend in the face, says ‘you never buy me anything’