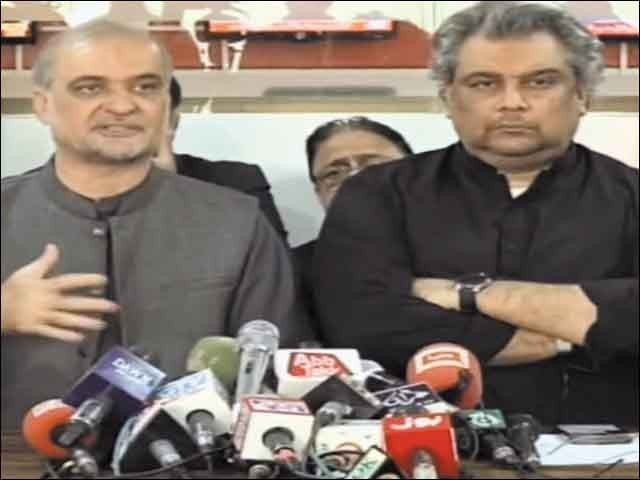 
The Jamaat-e-Islami (JI) and Pakistan Tehreek-e-Insaf (PTI) on Saturday formed a four-member joint committee to deliberate on a joint mayoral candidate and also tally the number of Form 11 among the two parties.

During the meeting, the two parties discussed the results of local body elections and also demanded recognition of the mandate of Karachi.

Talking to media personnel, Ali Zaidi said that a four-member joint committee of the two parties would be established to tally Form 11 that both parties possessed.

He furthered that the matter of municipal election in Karachi had become a ‘drama’ and that the PTI’s mandate was stolen in approximately 40 Union Councils (UC).

The PTI leader said that the party had informed the Election Commission of Pakistan (ECP) about the stolen mandate. He added that it was the right of every democratic party to protect each other’s mandate and that transparency in the election process and results was essential.

Zaidi stated that the Zardari “mafia” was running a system of destruction in Karachi.

He maintained that differences of opinion were commonplace in politics and that the PTI and JI were in contact even before the elections. He added that the purpose of political parties sitting together should be for the betterment of the country.

He also said that the party had its reservations about constituencies.

The results of local body elections are in front of everyone, he said, adding that the process of recounting the votes was conducted to benefit the Pakistan People’s Party. Rahman alleged that during the recount, the results of the UCs were changed.

He further claimed that the election results were being changed by the filing of recount requests.

The JI leader also strongly condemned the attack on PTI’s Zaidi and his team.

“While we were protesting, we received a call from Chief Minister of Sindh Murad Ali Shah and asked him to review and accept our demands,” Rehman said and demanded a consensus for the development of Karachi.

Adding that he had contested elections with the PTI in 2015, he reiterated the need for respecting all mandates. He stated that a joint four-member committee was formed to safeguard the mandate.

According to the JI leader, PPP was not in a position to elect a mayor because they lacked the numbers and reiterated said that those who had a mandate should be recognized.

He also said that the JI wanted MQM-Pakistan to contest local elections and that their boycott was largely their own.

“The MQM-P was talking about constituencies to run away from the election,” Rehman added.