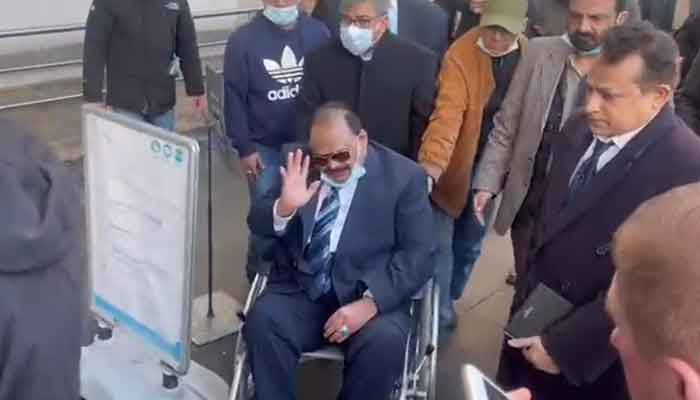 LONDON: The Muttahida Qaumi Movement (MQM) supremo Altaf Hussain’s terrorism trial has been shifted to Tuesday so that the jury could continue deliberations.

The arguments from both the defence and the prosecution had ended early on Friday and then Mr Justice May had issued instructions to the jury members to retire and return with a unanimous verdict on whether or not the MQM founder had committed two offences under UK’s Terrorism Act 2006. The jury retired on Friday without reaching a verdict.

On Monday, at the Kingston Crown Court, a 12-member jury deliberated over the case before Mrs Justice May to give its verdict on whether Hussain violated the UK’s anti-Terrorism laws on August 22, 2016, when he made two speeches from London addressing his followers in Karachi.

Altaf Hussain has been speaking to media almost daily outside the court. Speaking to this correspondent, he said he was “ready for any kind of outcome.”

He said on Monday morning: “There will be no surrender, no retreat. I have done nothing wrong, I apologised for the anti-Pakistan slogans raised during the protest but I will never apologise for what I did to try to raise the issues of Muhajirs. I stand by everything that I said.”

Hussain had been charged with two counts of encouraging terrorism contrary to section 1(2) of the Terrorism Act 2006. These relate to two speeches Hussain made on August 22 — first in the morning (the UK time) and second in the afternoon (the UK time) — in which he had been alleged by the Crown to have broadcasted speeches addressing the crowd “gathered in Karachi.”

Hussain has denied all charges. The prosecution says he incited violence in Karachi during his two speeches, six years ago. The judge has directed to the jury that the UK’s yardstick applies in Altaf Hussain’s case, not Pakistan’s.