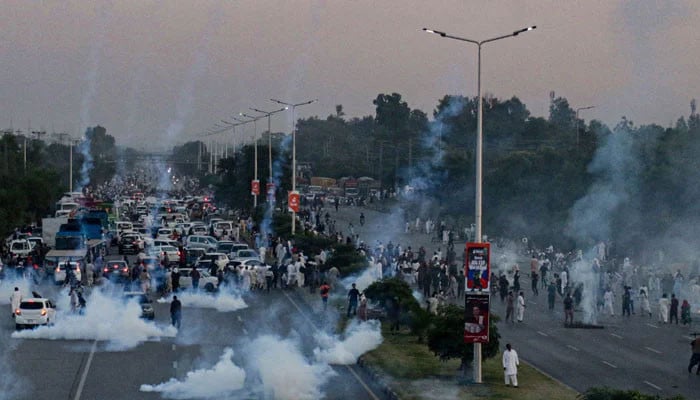 Islamabad Capital City Police has warned of legal action against protests without permission in the federal capital as PTI gears up to resume its long march after a pause following party chief Imran Khan’s injury in an attempt on his life.

PTI Chairman Imran Khan on Sunday announced that the party’s long march will resume on Tuesday, November 8, from Wazirabad, while he will join the convoy from Rawalpindi.

The PTI chief has been discharged from hospital and has now returned to his Zaman Park residence in Lahore.

The Islamabad High Court (IHC) issued notices to PTI leader Ali Nawaz Awan for November 11 over the Islamabad district administration’s miscellaneous plea seeking dismissal of Awan’s plea for a no-objection certificate (NOC) to hold a jalsa and sit-ins in the federal capital.

The court held a combined hearing on the district administration and Awan’s pleas.

The district administration’s lawyer maintained that the PTI had sought an NOC for the rally from November 3 to 5 but these dates have passed, therefore, the plea has become ineffective.

The sources said a decision to arrest PTI leaders, including Pervez Khattak, Sheikh Rashid Shafiq, Amir Kayani, Ali Amin Gandapur and Aamir Dogar and others has been taken.

Moreover, action against individuals involved in blocking ways leading to the Islamabad airport will also be taken.

8:00am — Islamabad police warn of action over protests sans permission

The Islamabad Capital City Police warned of taking action against the individuals involved in staging protests without permission in the federal capital. They alerted the citizens that they may face inconvenience in transit as the leaders of a political party have announced to block roads.

The police assured of keeping the ways leading to Islamabad international airport and said that federal law enforcement agencies will monitor the movements on motorway and roads leading to the airport. They requested the political leaders to stage protests on allotted spots with the permission of administration.