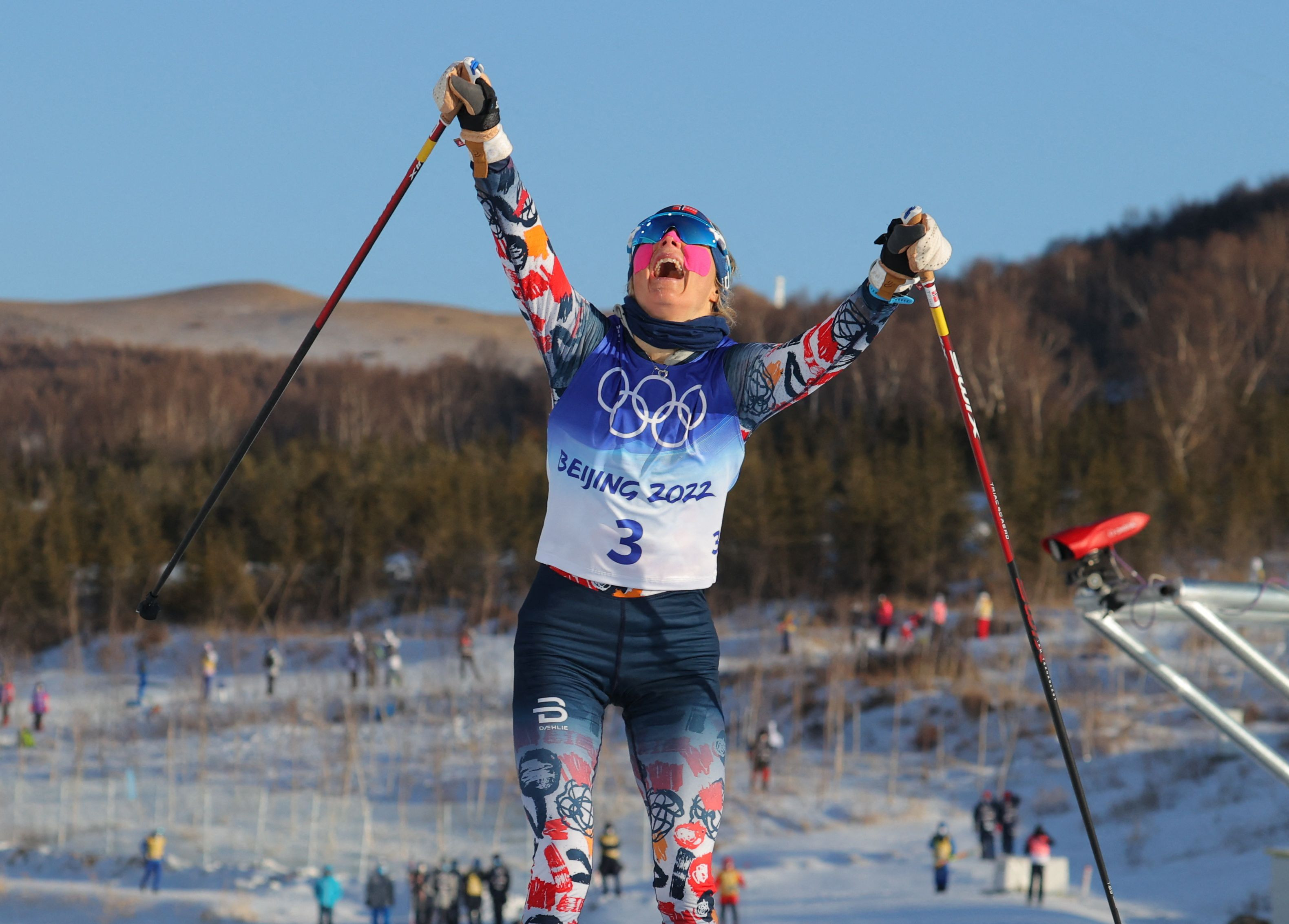 Johaug was a comfortable winner of the women’s 7.5-plus-7.5-kilometre skiathlon in what is expected to be the first of many cross-country skiing medals for Norway at these Games.

Dinigeer Yilamujiang, a 20-year-old Uyghur who was chosen by China as one of two athletes to light the cauldron in Friday’s opening ceremony, finished 43rd in the skiathlon race.

Yilamujiang’s inclusion in a ceremony watched by a worldwide television audience placed her at the centre of long-time controversy over rights abuses in China’s Xinjiang region.

The United States, Britain, Canada and Australia are among countries staging a diplomatic boycott of the Games over China’s rights record, and particularly the fate of the Uyghurs.

Asked whether the inclusion of a Uyghur competitor in a ceremony featuring several generations of Chinese athletes met the International Olympic Committee’s standard of political neutrality, IOC spokesman Mark Adams said she had “every right” to participate.

“As you’ll know from the Olympic Charter, we don’t discriminate against people on where they’re from, what their background is,” he said.

“I think the concept of having all the generations there was a really excellent one.”

The snowflake-themed opening ceremony in the “Bird’s Nest” was dazzling but less spectacular than the extravaganza that brought the curtain up on the Beijing Summer Olympics in the same stadium 14 years ago.

Before Chinese President Xi Jinping declared the Games open, IOC chief Thomas Bach appealed to “all political authorities across the globe”, urging them to “give peace a chance”.

“In our fragile world, where division, conflict and mistrust are on the rise, we show the world – yes, it is possible to be fierce rivals while at the same time living peacefully and respectfully together,” Bach said.

Russian President Vladimir Putin, at loggerheads with the US and much of Europe over the build-up of troops on the Ukrainian border, was among the leaders who attended the ceremony.

Xi, under whose rule China has adopted a far more muscular attitude internationally compared to 2008, was given a rapturous welcome by the socially distanced crowd wearing face masks.

The Games will run until February 20 and are taking place inside a vast “closed loop” bubble designed to thwart the virus.

The nearly 3,000 athletes and tens of thousands of support staff, volunteers and media have been cut off from Beijing’s general population.

There have been more than 350 Covid-19 cases in the bubble, among them an unknown number of athletes.

Germany’s three-time Olympic nordic combined champion Eric Frenzel will miss his first event on Wednesday because he tested positive for coronavirus on arrival in Beijing, his team said.

China, where the virus emerged in late 2019, has pursued a no-nonsense zero-Covid policy and adopted the same approach to the Games, with everyone inside the bubble tested daily and required to wear a mask at all times.

Later Saturday, Canadian freestyle skier Mikael Kingsbury will attempt to win the gold medal for a second consecutive Olympics in the bone-shaking moguls event under floodlights in Zhangjiakou, just outside Beijing.

Then on Sunday, Norwegian skier Aleksander Aamodt Kilde is the favourite in the high-speed men’s downhill – traditionally one of the highlights of a Winter Olympics.

Kilde’s American girlfriend Mikaela Shiffrin meanwhile admitted she would be disappointed to leave Beijing without a medal, but warned it was impossible to have a flawless Games.

Shiffrin is one of the headline acts at Beijing 2022 as she pursues a third gold after triumphing in slalom at the 2014 Sochi Games and giant slalom four years later in Pyeongchang.

“I’ve never in my life had three weeks where I had no regrets and no disappointment,” Shiffrin said. “At the Olympics it’s impossible to have the perfect two weeks.”