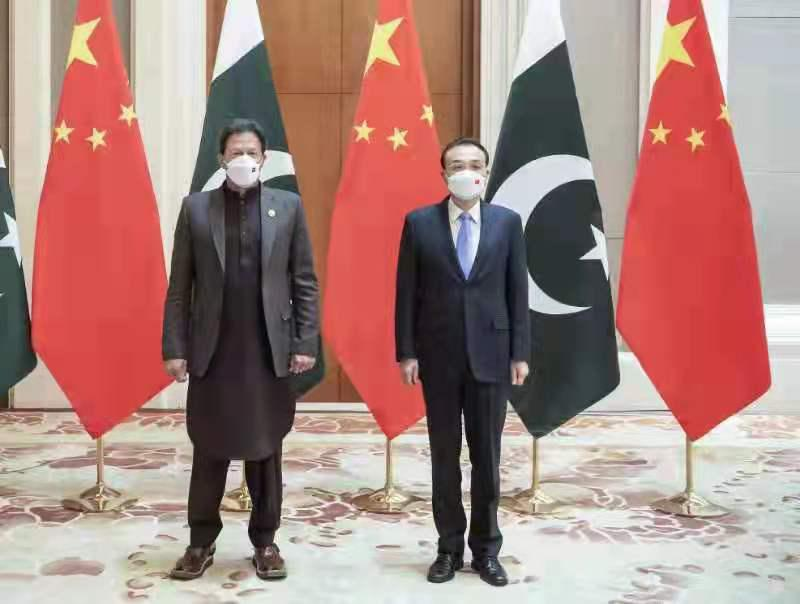 Pakistan and China have underlined the importance of “all-weather” strategic partnership between the two neighbouring countries and reiterated to support each other issues of core interest.

He was accompanied by the foreign minister, minister for finance, planning minister, information minister and other senior officials, according to a statement issued by the Prime Minister’s Office.

The interaction between the two leaders was marked by traditional sentiments of warmth, deep mutual trust and understanding. During the meeting, they reviewed the entire gamut of bilateral ties including discussions on the bilateral economic and trade relations, onward march of CPEC and important issues of regional and global concern, read the communiqué.

“The two sides reaffirmed the centrality of the Pakistan-China All-Weather Strategic Cooperative Partnership and reiterated support on each other’s issues of core interest.”

Congratulating Premier Li for organising Beijing Winter Olympics, PM Imran highlighted that strategic ties between Pakistan and China served the fundamental interests of the two countries and were a factor of peace and stability in the region.

He added that successful celebrations of the 70th anniversary of the establishment of diplomatic relations held last year injected a new impetus to the bilateral friendship.

The prime minister thanked the Chinese government for support and assistance to Pakistan in dealing with the Covid-19 pandemic and timely supply of vaccines.

He appreciated the transformational impact of CPEC on Pakistan’s infrastructure, energy, socio-economic development and improvement in livelihoods of the people.

He underlined that Pakistan is committed to the high-quality development of CPEC through its mutually reinforcing industrial, trade, health, digital and green corridors.

PM Imran shared with Premier Li the measures taken by the government to provide policy guidance and support for enhanced Chinese investments in the CPEC SEZs and special technology zones, and for the safety and security of Chinese nationals, projects and institutions in Pakistan.

Exchanging views on the regional security situation, the prime minister highlighted the serious situation in Indian Illegally Occupied Jammu and Kashmir (IIOJK) as well as the importance of urgent action by the international community to alleviate the sufferings of the Kashmiri people.

He also underscored the importance of Pakistan and China working together to promote shared objectives of peace, stability and development in Afghanistan and regional connectivity.

The two leaders agreed to work closely on further deepening bilateral economic engagement and reaffirmed their commitment to further advance the multifaceted strategic cooperative ties and building the “Pakistan-China Community of Shared Future in the New Era”.