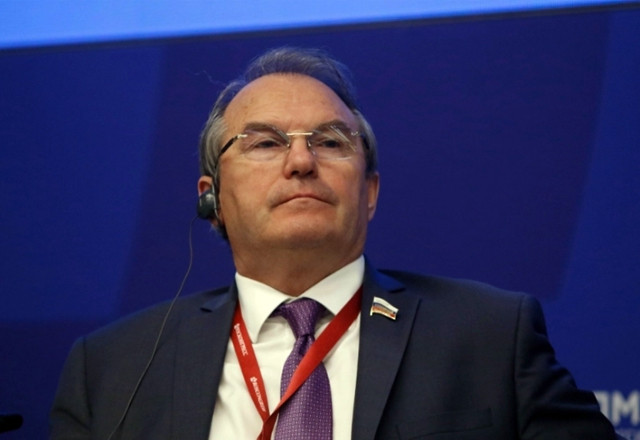 
Islamabad has sought explanation from Russia after one of its senators alleged that Pakistan and Ukraine recently discussed the technologies for developing nuclear weapons.

“We are surprised by such an unfounded and baseless statement. It is without any rationale, and is entirely inconsistent with the spirit of Pakistan-Russia relations,” said foreign office spokesperson Asim Iftikhar in a statement on Tuesday.

“We are seeking clarification on this from Moscow,” the spokesperson added.

Earlier, Russian senator Igor Morozov alleged that Ukraine and Pakistan recently discussed the technologies for developing nuclear weapons. The latest claim came after Russia ramped up its rhetoric regarding Kyiv’s alleged preparations to use a radioactive “dirty bomb”.

The Russian lawmaker made the remarks during a news conference titled “Nuclear Provocations in Ukraine: Who Needs It?” as part of the special project “Ukrainian Dossier”.

Morozov argued that the ability of Ukraine to produce a “dirty bomb” is not a secret to anyone. However, he contends that lack of financing is the fundamental issue. Morozov stated “the threat is real” while discussing the potential for Ukraine to use a “dirty bomb” as a provocation.

The legislator added that the Tochka-U ammunition could be employed with a low-power nuclear charge. He also highlighted that without Congress’ approval, the United States president is permitted to use low-yield atomic bombs anywhere in the world.

A ‘dirty bomb’ is a type of tactical nuclear weapon that also includes radioactive isotopes in addition to the traditional explosive charge. When the charge explodes, the container is destroyed, and the radioactive material is then dispersed by a shockwave that contaminates both the immediate region and locations far from the explosion.

Additionally, he did not completely exclude the possibility that Ukrainian President Volodymyr Zelensky discussed nuclear weapons with his British and American allies.

But the Russian politician offered no convincing evidence to support his claims. Islamabad was previously found sending weaponry and ammunition to Kyiv in the ongoing Russia-Ukraine conflict.

Pakistan has maintained a delicate balance since Russia invaded Ukraine. It has not explicitly condemned the Russian action but at the same time has expressed concerns over the humanitarian situation in Ukraine.