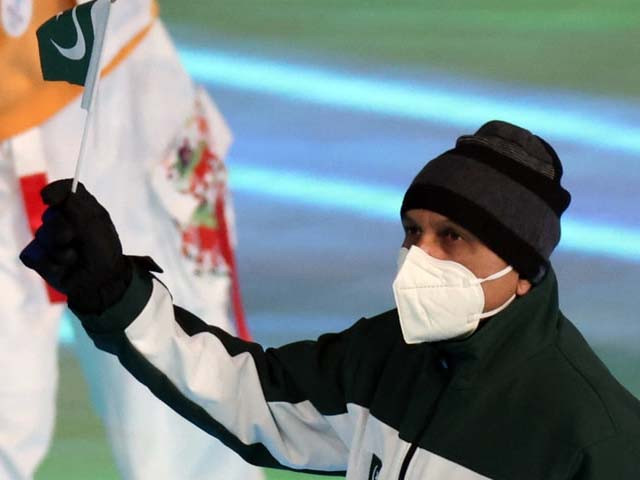 
Muhammad Karim is all set to bag the first medal for himself and the country in the Winter Olympics as he braces to take to slopes at China National Alpine Skiing Center, Beijing on Wednesday.

Pakistan’s top alpine skier is very excited and fully prepared to participate in the Slalom event and confident to win the first medal for the country in the Winter Olympics.

“I have been conducting strenuous training since I arrived here. I am confident to give my best performance and hope to win the hearts of the Pakistani people,” he told APP.

Muhammad Karim, 26, along with the Pakistani contingent arrived in the Chinese capital on February 2 and participated in the colourful opening ceremony of the Beijing Winter Olympic on the evening of February 4.

The Pakistani contingent was accorded a very warm welcome and applause by thousands of Chinese spectators the moment it entered the arena waving the national flag during the athlete parade.

“The warm welcome shows regard and affection of the Chinese people for their Pakistani brethren,” he said.

The top ski player from Naltar, a village in Gilgit-Baltistan considered participating in the Winter Olympics a great chance to put Pakistan on the map of international sports.

“I have witnessed the latest technologies on ski slopes and the world’s best sports facilities. I can’t wait to participate in the competition,” he added.

The Pakistani giant slalom skier appreciated the Chinese management for providing excellent food and accommodation. ‘The training slopes are also very close to the accommodation.”

“I have competed in two Winter Olympics in Sochi, Russia and Pyeongchang, South Korea but facilities in Beijing are much better and world-class,” he said.

Read More: A sea of red in Saudi shops; but don’t mention Valentine’s

He congratulated China on holding Winter Olympics despite the difficult situation of Covid-19, adding, “The Chinese authorities have taken comprehensive measures to prevent and control the spread of Covid-19. I wish a great success of the Beijing 2022 Winter Olympics,” he remarked.

He hoped that in the future the two countries could cooperate in the development of winter sports and China could help Pakistan in training more talents of winter games.

Muhammad Karim started skiing at the age of four under the guidance of his father and elder brother. He is determined to further improve his skiing skills at the Beijing Winter Olympics and at the same time encourage Pakistani children to take up the sport.

The 24th Olympics Games also known as Beijing 2022 Winter Olympics are being hosted by the Chinese capital. After the 2008 Summer Olympics in Beijing, the Winter Olympics has been organised in the same city, making Beijing the first dual Olympic city in history.