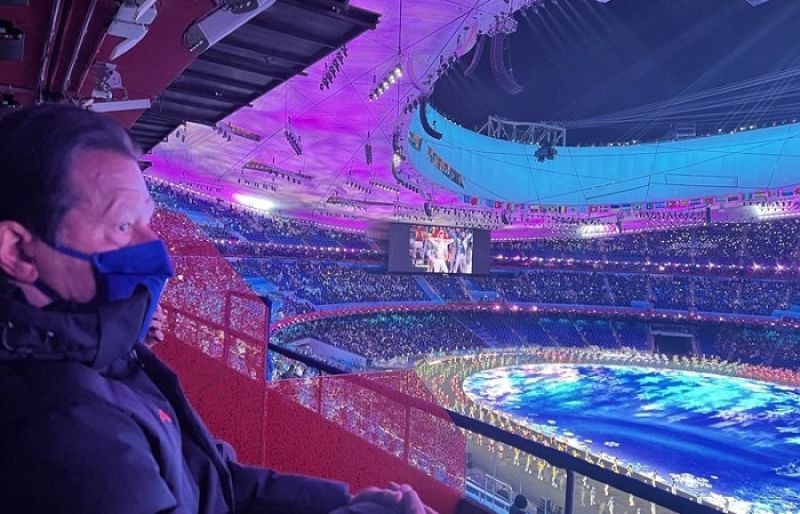 Prime Minister Imran Khan, who is on a four-day visit to China, joined other world leaders at Beijing’s National Stadium to witness the opening ceremony of the Winter Olympics 2022 on Friday.

The prime minister, who reached China on Thursday, was accompanied by Foreign Minister Shah Mahmood Qureshi, Information Minister Fawad Chaudhry and Planning and Development Minister Asad Umar on the occasion.

Among the athletes parading at the ceremony was Pakistani skier Mohammad Karim from Gilgit-Baltistan. The 26-year-old is the only Pakistani athlete who will compete in the Alpine Skiing Slalom event on February 16.

A tiny four-member contingent will be representing the country at the Winter Olympics, the Pakistan Olympic Association announced on Tuesday. Besides Karim, it includes Syed Noman Ali as the chef de mission, Nadeem Ajmal Khan as the team leader and Mirza Mohammad Qamar as the Covid-19 liaison and the coach.

PM Imran and his delegation rose from their seats to join the spectators in welcoming Pakistan’s squad as it paraded at National Stadium, waving the national flag.

According to media reports, around 3,000 athletes from 91 nations would compete across 109 medal events in the Winter Olympics, which will conclude on February 24.

Soon after the start of the ceremony, the Chinese flag was passed among 56 people representing China’s different ethnic groups before it was raised and the national anthem performed.

Held on the first day of Spring by the Chinese calendar, the ceremony saw an opening act by dancers waving glowing green stalks to convey the vitality of the season, followed by an explosion of white and green fireworks that spelled the word “Spring”.

On a three-dimensional cube resembling a block of ice, lasers carved imagery from each of the previous 23 Winter Games. The block was then “broken” by ice hockey players, enabling the Olympic rings to emerge, all in white.

That was followed by the traditional “parade of nations”, with each of the 91 delegations preceded by a woman carrying a placard in the shape of a snowflake resembling a Chinese knot.

In keeping with Olympic tradition, the parade was led into the stadium by Greece with the rest ordered by stroke number in the first character of their Chinese name, which meant Turkey was second, followed by Malta, with host China set to go last.

The entrances for “Hong Kong, China”, as well as for Russia, generated applause in the partially filled stadium.

Russian President Vladimir Putin, the highest profile foreign leader present for the Games, could be seen in the stadium without a mask. However, the athletes from his country were unable to carry its flag due to doping violations, marching instead under the standard of the Russian Olympic Committee.

The opening ceremony took place under the shadow of the Covid-19 pandemic and a diplomatic boycott of the Games by some countries, including the United States and the United Kingdom, over alleged human rights violations by China.

The crowd itself was pared down, with organisers deciding last month not to sell tickets to Olympic events to curtail the spread of Covid-19.

A “closed loop” separated competitors and other personnel from the Chinese public throughout the Olympics.