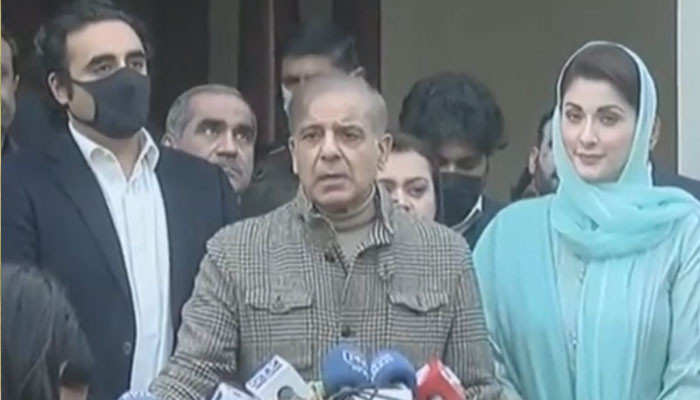 The development came during a luncheon hosted by Leader of the Opposition in National Assembly Shahbaz Sharif at his house in Lahore’s Model Town.

Talking to journalists following the luncheon, Shahbaz Sharif said, “If we want to save this country from destruction, then we will have to get rid of this government.”

Shahbaz said that the consultative meetings will be held, first, within PML-N’s Central Executive Committee and then with PDM. Following the meetings, a joint anti-government strategy will be chalked out, he said.

“If we don’t join hands and come on the same page, then the nation will not forgive us. We spoke in depth about the option of a no-confidence motion [against PM Imran Khan].”

Shahbaz said the meeting’s participants also tried to form consensus over the anti-government long march and two to three recommendations were also made.

Shahbaz blamed the government for “constantly lying to the people” and claimed that the nation had never seen such worsening situation since Pakistan’s inception.

“The PTI-led government has failed on all fronts […] today, we see nothing but destruction and devastation in front of us.”

For his part, Bilawal said he had discussed his party’s strategy against the government with Shahbaz and other PML-N leaders present in today’s meeting.

“We discussed matters in detail. We came to a conclusion that a decision [with regards to ousting the government] is very crucial, given the burden of rising inflation on the masses.”

Bilawal said despite PPP’s differences with PML-N in the past, the party was ready to keep them aside “for a greater cause”. He said a better working relation between PML-N and PPP would pose a danger for the government.

Bilawal said he welcomed the PDM’s long march, but did not answer the question on whether PPP would be joining it or not.

Maryam was asked about her differences with Bilawal and how would they take their working relationship forward. At this, she said differences of opinion exist between political parties, but we “are ready to unite for the people.”

Bilawal also said: “We are ready to take every possible step to remove Imran Khan.”