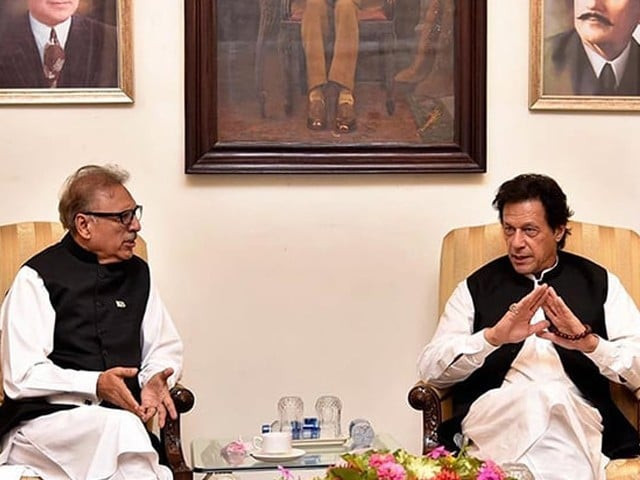 Former prime minister and Pakistan Tehreek-e-Insaf Chairman Imran Khan has said that President Arif Alvi is in touch with him and will consult on the summary of the appointment of Chief of Army Staff (COAS).

The statement came a day after the General Headquarters (GHQ) confirmed that it forwarded the summary containing the names of six senior-most lieutenant generals to the Ministry of Defence that would pave the way for a smooth transition in the army’s top command.

The PMO also confirmed earlier this morning that it had received the summary for the COAS’ appointment. The new army chief will take charge on November 29 as the incumbent General Qamar Javed Bajwa would doff his uniform the same day after completing six years in office.

Read more: COAS name to be finalised before Shehbaz leaves for Ankara: Asif

“President Arif Alvi is in touch with me [regarding the COAS appointment]. Whenever he gets the summary, he will consult me,” Imran said during an interview with a private TV channel on Wednesday.

The deposed premier said that if the incumbent prime minister can consult “fugitive” — a reference to former PM Nawaz Sharif — then why can’t Dr Arif Alvi discuss the all-important appointment with him as he’s the party chief?

“I don’t know how much truth there is in the words of former spokesperson of Pakistan Muslim League-Nawaz based in London Tasneem Haider. We will not do anything that is against the law,” he said.

Meanwhile, talking to journalists at his residence in Lahore’s Zaman Park, the PTI chief said that the army chief’s appointment should be on merit. “How can a criminal sitting in London appoint an army chief… the purpose of appointing an army chief of choice is only to harm the PTI.”

Read: COAS appointment: Will SC interfere to nip the potential crisis in bud?

The prime minister is now set to pick two generals from the list to promote them to the rank of four-star and then appoint one as the Chairman Joint Chiefs of Staff Committee and the other as the army chief.

Earlier on Tuesday, Defence Minister Khawaja Asif said the decision to appoint the army chief would be announced within the next 48 hours, saying the summary would reach the PM Office in the next 24 hours and the prime minister was expected to choose the new military chief in the next 24 hours. “It will take a total of 48 hours,” he said.

The crucial appointment continues to dominate national discourse for the last few days despite appeals by the government ministers not to create unnecessary hype.

On Tuesday, there was a flurry of meetings during the day, including Prime Minister Shehbaz Sharif making a first public appearance after staying in isolation due to Covid-19 when he met former president Asif Ali Zardari.

The prime minister continued closed-door consultations in the power corridors in order to develop a consensus among the stakeholders for the appointment of the military chief a day after he recovered from Covid-19.

With all eyes on the premier, former president and head of a key coalition party, Asif Ali Zardari, called on the premier at the Prime Minister House to discuss about the key appointment and the overall political situation, including the upcoming rally of PTI on November 26.

The meeting between PM Shehbaz and ex-president Zardari was seen as crucial, as the prime minister moves closer to picking up Bajwa’s successor.

Though the process to appoint the new army chief kicked off with PM Shehbaz on Monday formally writing a letter to the Ministry of Defence, seeking a summary for the potential candidates, the consultative meetings have lately gained momentum and picked up the pace just before the final week of General Qamar Javed Bajwa’s retirement began.

An insider told The Express Tribune that Zardari extended full support to PM Shehbaz for whatever decision he would arrive at over the appointment of the new army chief.

Zardari is believed to have assured Shehbaz that his party would back the government at this crucial juncture. The JUI-F chief, another coalition partner, extended similar support.