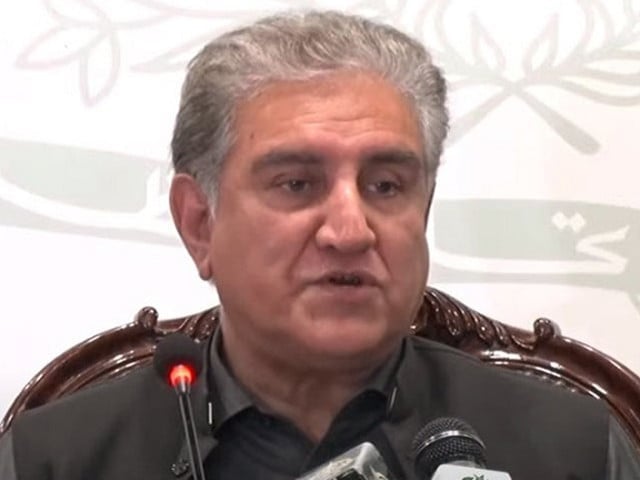 Pakistan Tehreek-e-Insaf (PTI) leaders on Monday said that they do not doubt the intention of Punjab government as they have been compelled not to register the first information report (FIR) of an assassination attempt on party chief Imran Khan’s life as per their wishes.

Ever since a gun attack took place at PTI’s long march in Wazirabad, the PTI chief has been demanding that a case be registered against Prime Minister Shehbaz Sharif, Interior Minister Rana Sanaullah and a military officer for plotting against him.

Imran along with his party leaders are adamant that any FIR lacking these three names would simply be a piece of paper and nothing else.

“We do not doubt the sincerity of the Punjab government, but they are under compulsion [to not register the FIR],” former foreign minister Shah Mahmood Qureshi said while talking to the media in Islamabad following a party meeting.

Read more: PTI to stage sit-in at Faizabad on Nov 26

He said that the FIR for the assassination attempt on Imran could not be registered despite their best efforts.

“Despite the attack, we did not lose our patience. We continued the long march keeping in mind the rights of the people. It was our responsibility to keep it peaceful,” he added.

He said that the only way to save the country’s economy was to hold general elections as soon as possible.

Speaking on the occasion, PTI leader and former finance minister Asad Umar said that the people were questioning the state’s role in the entire episode. “People are saying if a former prime minister cannot nominate people of his wishes [in the FIR], what treatment would they get,” he said.

He said Pakistan’s economy was on ventilator, adding that all big industries in the country were performing negatively as opposed to Imran Khan’s rule when they were growing at 12 per cent.

Umar said that all preparations regarding their long march have been completed. “We have chosen Pindi and Murree road. It will be Pakistan’s biggest rally. All tanzeems are in close coordination.”

The PTI leader further said that all Pakistanis should participate for ‘real freedom’ so that Pakistanis make decisions for Pakistan and not some foreign country.