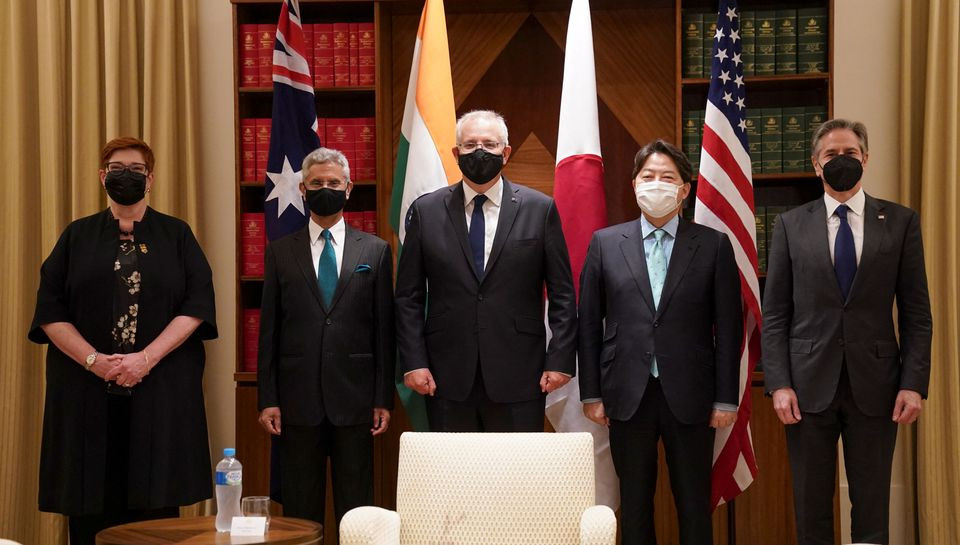 
The United States, Australia, Japan and India on Friday pledged to deepen cooperation to ensure the Indo-Pacific region was free from “coercion”, a thinly-veiled swipe at China’s growing economic and military expansion, as their top diplomats convened to also tackle climate change, COVID and other threats.

Foreign ministers of the so-called Quad, the informal grouping of the four countries, vowed to work on humanitarian relief, terrorism, cyber and maritime security and global supply chain challenges.

Despite being outside the group’s scope, an escalating crisis between the West and Russia over Ukraine was also a top agenda item, with US Secretary of State Antony Blinken casting Moscow’s build-up as a challenge to the international rules-based order, which he said Quad would work to preserve.

“That includes championing the rights of all countries to choose their own path, free from coercion and the right to have their sovereignty and territorial integrity, respected. Whether that’s here in the Indo-Pacific, in Europe, or anywhere else in the world,” he said in his opening remarks of the meeting.

Blinken arrived in Australia this week as Washington grapples with a dangerous standoff with Moscow, which has massed some 100,000 troops near Ukraine’s border and stoked Western fears of an invasion. Russia denies it has such plans.

The Biden administration wants to show the world its long-term strategic focus remains in the Asia-Pacific and that a major foreign policy crisis in one part of the world does not distract it from key priorities.

Asked by reporters on Friday if confrontation with China in the Indo-Pacific was inevitable, Blinken replied “nothing is inevitable”.

New pledges are unlikely to be announced before a May summit of Quad leaders in Japan that President Joe Biden plans to attend.

“More than one authoritarian regime is presenting itself in the current world climate as a challenge. DPRK (North Korea), China as well and they will be part of our discussions today. We strongly support US leadership on these challenges,” she said before a bilateral meeting with Blinken.

Britain said the “most dangerous moment” in the West’s standoff with Moscow appeared imminent, as Russia held military exercises in Belarus and the Black Sea following the buildup of its forces near Ukraine.

The Quad nations have begun holding annual naval exercises across the Indo-Pacific to demonstrate interoperability, and the United States itself conducts freedom of navigation patrols in the South China Sea.

China has previously denounced the Quad as a Cold War construct and a clique “targeting other countries”.

Blinken’s trip comes after China and Russia declared last week a “no limits” strategic partnership, their most detailed and assertive statement to work together – and against the United States – to build a new international order based on their own interpretations of human rights and democracy.

US-Chinese ties are at their lowest point in decades as the world’s top two economies disagree on issues ranging from Hong Kong and Taiwan to the South China Sea and China’s treatment of ethnic Muslims.

Biden told Asian leaders in October the United States would launch talks on a new Indo-Pacific Economic Framework. But few details have emerged and his administration has been reluctant to offer the increased market access Asian countries desire, seeing this as threatening American jobs.

Critics say the lack of US economic engagement is a major weakness in Biden’s approach to the region, where China remains to be the top trading partner for many of the Indo-Pacific nations.