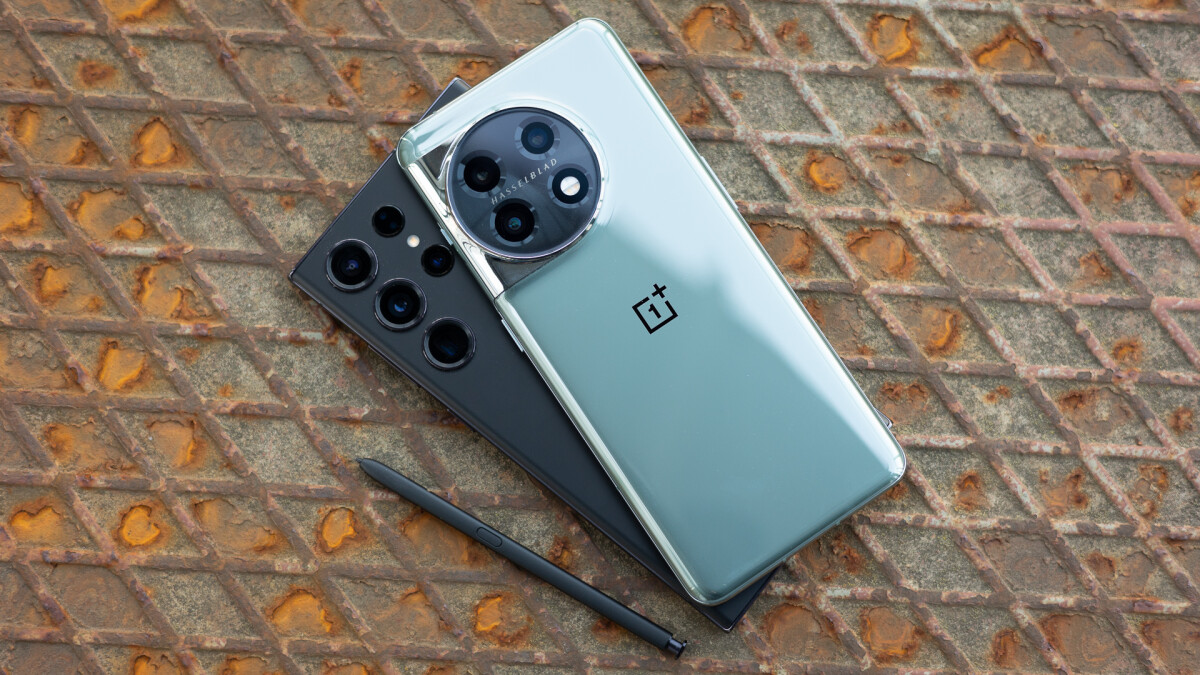 The Samsung Galaxy S23 Ultra is shaping up to be the most popular Android flagship phone of 2023, but can underdog OnePlus offer more with its equally powerful OnePlus 11?

The OnePlus 11 has a few aces up its sleeve: super fast charging that eliminates the need for overnight top-ups, performance optimizations that make it great for gamers, and a new Hasselblad-branded camera system with a focus on capturing high-quality portrait photos.

Those are all unique features, but the Galaxy S23 Ultra is without a doubt the more versatile phone: it has more features and longer software support, it has cool and versatile zoom cameras, it has an S Pen, it has a brand new 200MP camera that is now more capable in challenging conditions, and it’s the most refined this phone has ever been.

So which one should you go for? Let us guide you and tell you all about these two!

Galaxy S23 Ultra vs OnePlus 11 in a nutshell:

The OnePlus weighs less and is more compact than the Galaxy, but lacks an S Pen

The first and most obvious design difference between these two is just about their physical size. Both are big phones, but the OnePlus is more palatable, it’s narrower so you can hold it more comfortably in one hand and it weighs less too, while the Galaxy is truly a gigantic phone.

Build quality feels premium on both of them, both have an aluminum frame, toughened glass on the front and the back, and a slightly curved screen, but all of those premium features are something we kind of expect out of a flagship phone these days.

The OnePlus only comes in two colors, a green and a unique glittery black finish, while the Galaxy S23 Ultra colors are more plentiful and you do have a white model too.

One detail worth mentioning is the positioning of the buttons. The OnePlus has its power key on the right and the volume keys on the left, much like an iPhone, while the Galaxy has both the power key and volume rocker on the right side. We also love that the OnePlus 11 keeps the Alert Slider, which is OnePlus’ glorified mute switch, it works great and is very convenient.

We should also mention that the OnePlus comes in a larger box that includes the zippy 100W fast charger coupled with a signature red OnePlus cable (with standard USB-A to USB-C connections), and you even get a simply but useful case in the box. The Galaxy only comes with a cable in the box, but no charger and no case, both things you would need to purchase separately.

When it comes to screens, the Galaxy has the upper hand as it uses the latest and most advanced Samsung E6 OLED panel, while the OnePlus 11 relies on an older generation OLED screen that is just a bit less impressive.

Let us be clear: neither of these is a “bad” screen, but the Galaxy gets noticeably brighter outdoors and has slightly better characteristics.

Both phones use a fingerprint scanner as their main biometric solution, but the Galaxy bets on an ultrasonic one, while the OnePlus uses an optical fingerprint reader. The OnePlus is particularly fast and easy to use. Both phones can also unlock using a 2D face scan, not quite as secure as a fingerprint, but still a welcome feature.

The biggest news in Android flagships for 2023 has got to be the Qualcomm Snapdragon 8 Gen 2 chip.

It’s more powerful, does not overheat as easily as previous Snapdragon chips and shapes up to be a huge success. Both phones have this chip, and despite some slight differences in the setup, both perform to the highest level.

The perceivable differences in performance between the Galaxy and the OnePlus come from the custom interfaces rather than the processors.

We should note that the OnePlus is available in a version with a whopping 16GB of RAM, which is sweet overkill and will ensure your dozens of open tabs stay open and you multitask with ease.

We should also say that the Galaxy comes with a promise of four major software updates, which is a huge win in the Android space where you typically only get three years of support, so it is the more future-proof device.

Galaxy is more versatile, but OnePlus puts the focus on portrait shots to stand out

Both phones make some significant changes to their camera systems: the Galaxy adopts a brand new 200MP main camera with a promise to capture cleaner low light shots, while the OnePlus 11 brings a 2X zoom telephoto camera to the mix to help it capture better-looking portraits.

Here is a breakdown of the camera specs:

In our testing, the OnePlus captures images worthy of a flagship both during the day and at night. Don’t be fooled by the burned out highlights that you see in the viewfinder on the OnePlus, as those are not representative of the actual photo you will. After the processing finishes, you get a vastly different photo with good dynamic range and pleasing colors.

We have not yet tested the Galaxy S23 Ultra camera, but we are expecting to have it soon, and we will be updating this section with samples photos and videos, and will breakdown the camera differences in a lot more detail, so check back soon.

Both phones come with dual loudspeakers as is the norm these days, and also both are expected to up the ante from their previous generation phones with louder and cleaner sound.

We are yet to test the Galaxy S23 Ultra in detail, so check back here soon for an update on its audio quality performance.

Haptics are one area that has made a huge leap on the OnePlus 11. This phone has incredibly pleasing vibration feedback, which kicks in gently when you type to alert you of your every keystroke. This is one of those small refinements that you may not notice at first, but that eventually makes a huge difference over time. Kudos to OnePlus!

The fast charging of OnePlus makes a big difference

With the same, 5,000mAh battery size, both phones are well equipped to take on daily challenges, but despite the more efficient processor, they are not 2-day phones and you’d still need to top up every day, or day and a half with more modest use.

We will be updating this section with our test results, so check back soon for more specifics.

One area where the OnePlus is just way ahead of the Galaxy S23 Ultra is charging speeds.

The OnePlus 11 supports 100W charging and in our testing, it charged up fully from 0 to 100% in just 23 minutes, even faster than the company’s official claims of 25 minutes for a full charge!

That is truly mind boggling and it means that you can have about 80% charge in around 15 minutes and you can completely forget about overnight charging! The Galaxy, in contrast, supports up to 45W charging speeds and you don’t even get a charger in the box. It will take around 1 hour and 10 minutes for a full charge, which is considerably slower than the OnePlus.

We would take the faster wired charge over wireless charging any day, but some people might miss not having that feature.

What do you think about these specs, is there something you want to see that the companies have not included yet?

At the end of the day, the OnePlus 11 has been a pleasant surprise.

After the OnePlus 10 Pro, we approached the OnePlus 11 with lowered expectations, but OnePlus has refined the design making it a lot prettier and the phone is more reasonably sized than the gargantuan Galaxy S23 Ultra. OnePlus has also improved the camera quality and that new Snapdragon 8 Gen 2 chip just roars, plus we really appreciate the convenience of the fast charging. And all of that, comes at a reasonable sub $1,000 price.

The Galaxy S23 Ultra lacks the fast charging and is bulkier, but it is also the technologically superior phone. The S Pen is a nice convenience that still has no alternative among Android flagships, the performance is excellent, the camera system is the most versatile out there and the phone will get four years of software support, more than the rest in the Android space.

If you don’t mind the bulky build and want the most versatile phone on the market, go for the Galaxy, but if you appreciate pure speed with a clean UI and incredibly fast charging, the OnePlus 11 is a surprisingly good option this year.