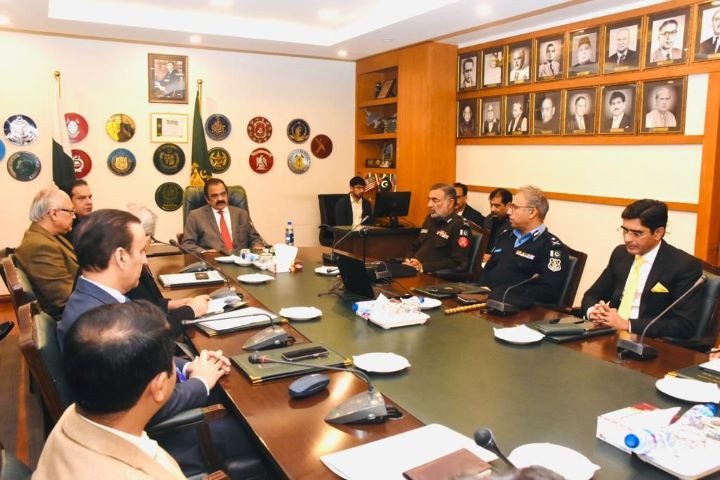 
Interior Minister Rana Sanaullah on Friday said that the federal and provincial governments must vow to “prevent unconstitutional acts” as he chaired a special meeting ahead of the Pakistan Tehreek-e-Insaf’s (PTI) long march toward the capital demanding early elections.

The minister stressed that “it is the constitutional responsibility of the provincial governments to stop a political party’s illegal treading onto the federal capital”.

“Chief secretaries should ensure that no government employee becomes part of any initiative or plan to attack the federation,” he added.

Read Imran to be allowed into Islamabad if he assures peace: Sanaullah

The meeting participants provided assurances of full compliance with the Constitution and the law in the event of a possible attack on the federation.

Yesterday, the Islamabad district administration had refused to grant permission to PTI Chairman and former premier Imran Khan to land his helicopter at the Parade Ground for November 26 Faizabad rally.

Earlier in the day, the army General Headquarters (GHQ) had informed the former ruling party that it had no objection to the landing and taking off of a helicopter, which would carry the PTI chief from Lahore to Islamabad, saying the party should approach the Capital Development Authority (CDA) or the federal government as the ground was under their jurisdiction.

Lieutenant Colonel Rao Farman Ali issued the no objection letter to PTI’s Additional General Secretary Omar Ayub, stating that the “General Headquarters has no objection to the request for placement of helicopter subject to clearance by concerned authorities”.

Talking to the media at the Allama Iqbal Park today, PTI General Secretary Asad Umar stated that DC Islamabad had to take responsibility and asked what “instructions” were being given to him.

He maintained that if something happened to Imran, the federal government would be responsible, and the DC Islamabad would be “directly responsible”.

He asserted that Imran’s helicopter will land at the Parade Ground, and questioned who the DC was when the GHQ had given the PTI chief permission to use a chopper for travel.