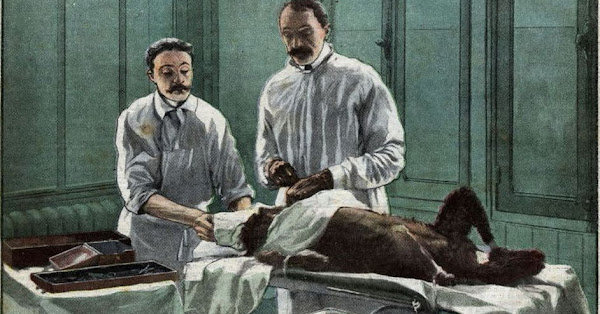 One of the most sensational presentations at the 1923 International Congress of Surgeons in London was made by the Russia-born French surgeon Serge Voronoff. Three years ago, Voronoff shot into notoriety with his controversial gland transplantation experiments that, he claimed, shaved off significant number of years from a person’s age. Voronoff began his presentation by showing the assembled audience of more than 700 leading surgeons the world over a series of films where he showed “before-and-after” effects of his treatments on several of his patients, all in their mid-sixties to late-seventies. Within four to twenty months after the treatment, the films showed remarkable improvement in their health and countenance, with some of them riding horseback, rowing and doing other athletic feats. Voronoff claimed that he had treated more than forty men over sixty years of age, many of which were wealthy and men of respectable profession. 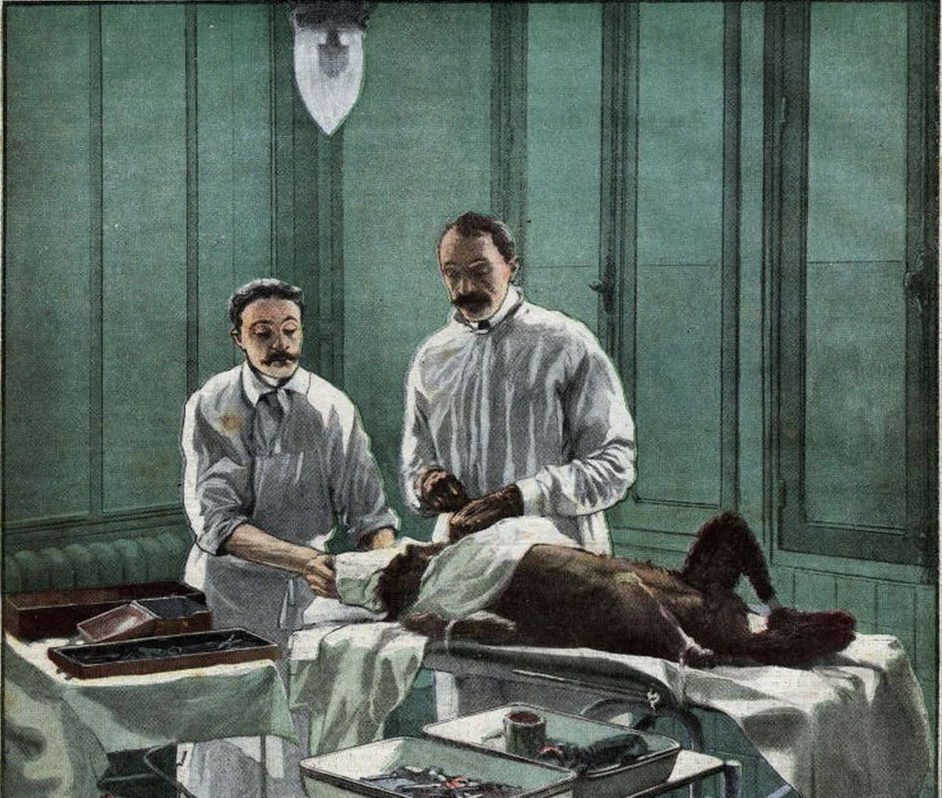 Serge Voronoff and his assistant operating on an old dog in a laboratory at the Collège de France. Photo: ‘Le Petit Journal’, October 22, 1922

Serge Voronoff was born in 1866 to a Jewish family in the village of Shekhman, in Russia. At the age of 18, after his graduation, Voronoff left Russia to study medicine in Paris. There he met noted French surgeon Alexis Carrel, who received the Nobel Prize in Medicine for his pioneering vascular suturing techniques. Under Carrel, Voronoff learned the techniques of transplantation and became fascinated with the possibilities of animal-to-human transplants that he believed could restore youthful vigor and even cure diseases via a transfer of hormones.

In 1889, Voronoff began working with experimental physiologist Charles-Édouard Brown-Séquard, who was also interested in the rejuvenating effects of animal hormones. Brown-Séquard conducted experiments on himself by injecting under his skin extracts of ground-up dog and guinea pig testicles. However, these experiments failed to produce the desired results and Voronoff became convinced that tissue grafts would produce more sustained effects than mere injections. 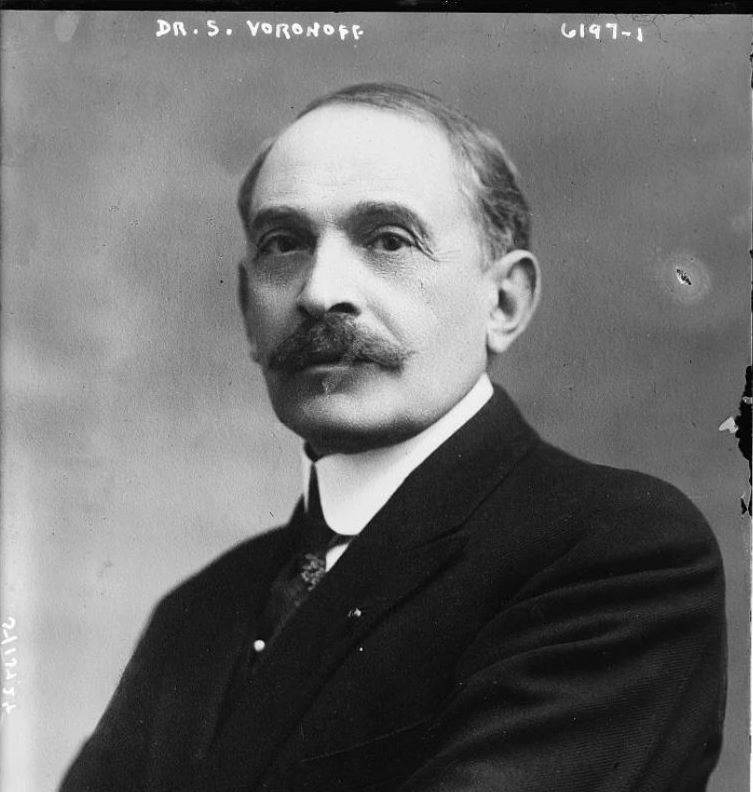 In 1896, Voronoff moved to Egypt where he took an active interest in eunuchs, studying these transgender women and how the lack of testicles affected them physiologically as well as psychological. Voronoff noted that these eunuchs were often obese, had a broad pelvis and flaccid muscles, and moved lethargically. After spending 14 years working and researching in an Egyptian hospital, Voronoff returned to France in 1910 to continue his experiments on animals, transplanting organs and tissues between different animal species. Eventually, Voronoff started transplanting animal organs into willing human patients. In one of his earliest human experiments conducted in 1913, Voronoff implanted the thyroid gland of a chimpanzee into a young French boy whom Voronoff described as a “pitiful imbecile”. Over the next several months, Voronoff claimed that the lad regained his color, weight, and height, and his mental faculties also returned to normal.

During the First World War, Voronoff became well known for performing bone transplants using material from combat amputees. He also transplanted chimpanzee bone on a wounded French soldiers, and this operation gave the doctor the idea of transplanting a monkey testicle to a man. Voronoff believed that testicles played not only the role of a sex organ but also impacted a person’s bone, muscle, nerve, and psychological development. Between 1917 and 1926 Voronoff tested out his theory on animals, doing more than 500 transplants on rams, goats, ewes, horses and bulls. According to his observations, older animals transplanted with younger animals’ testicles regained lost vigor. 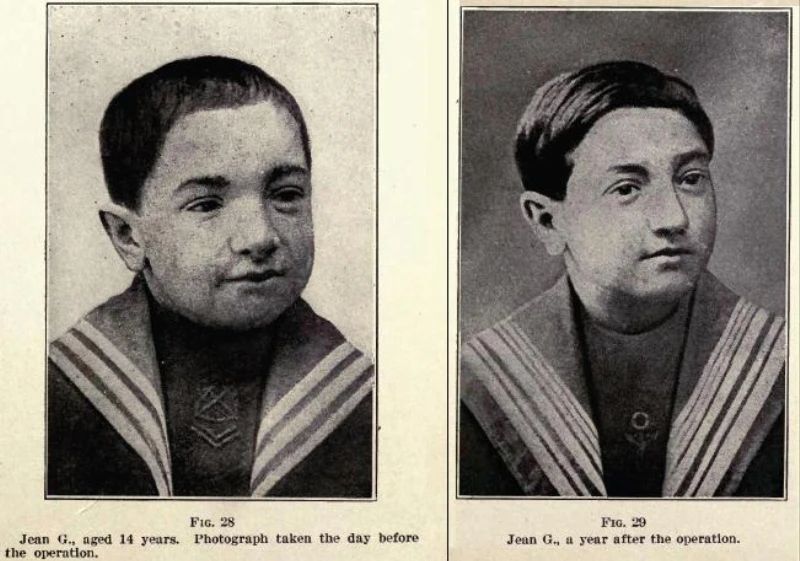 Before and after photograph of a 14-year-old boy that received an ape thyroid gland. From Serge Voronoff’s book “Life: A Study of the Means of Restoring (1920)”

In 1920, Voronoff conducted the first testicle transplantation on a 74-year-old senile man. The French doctor took the testicle of a monkey and cut it into strips a few centimeters wide and a couple of millimeters thick. Voronoff then attached the testicle tissue into the scrotum of the patient. The thinness of the tissue samples allowed the foreign tissue to fuse with the human tissue completely. Voronoff claimed that his procedure not only returned youthful energy and vigor, but also cured senility and improved memory. Voronoff also speculated that the grafting surgery might be beneficial to people with certain mental illnesses such as schizophrenia.

At the International Congress of Surgeons in London in 1923, Voronoff wowed the assembled guests with his seemingly ground-breaking solution to aging. Voronoff’s treatment became hugely popular and many millionaires signed up for the procedure. As many as 45 surgeons began using Voronoff’s techniques in various countries such as US, Italy, Russia, Brazil, Chile, and India. Between 1920 and 1940, some 2,000 people went under the knife, with 500 in France alone.

To cope with the staggering increase in demand, Voronoff opened a monkey farm in a villa he bought on the Italian riveria, and entrusted a former circus animal keeper to look after the primates. Castle Voronoff, as it came to be known, was also equipped with a small hospital where the doctor could perform the grafts. 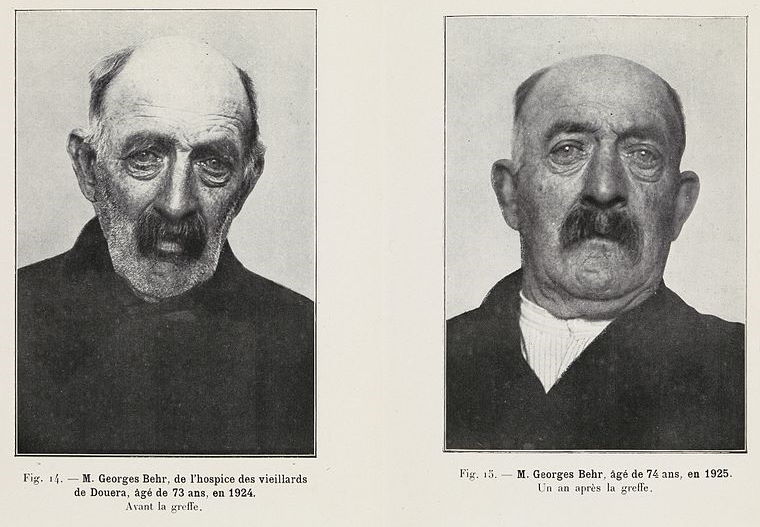 A comparison photo of a man before and after receiving Voronoff’s treatment.

Voronoff did not limit his surgeries to men. He also transplanted monkey ovaries to women in hopes of restoring their youth. Voronoff reported that he conducted a transplantation on a 48-year-old Brazilian woman, and four months after the surgery the woman had lost 16 kilos and her muscles became strong and her skin regained elasticity and shine. Two years later when Voronoff met her, she looked like a young 35-year-old, he claimed.

Voronoff also tried the reverse experiment, transplanting a woman’s ovary to a monkey and then tried to inseminate it with human sperm, which didn’t work. The publication of this experiment in a 1929 book by writer Félicien Champsaur further boosted Voronoff’s notoriety.

Voronoff’s success afforded him a lavish lifestyle. When he stayed in Paris, Voronoff used to occupy the whole of the first floor of one of Paris’s most expensive hotels, surrounded by a retinue of chauffeurs, valets, personal secretaries and two mistresses.

Despite his best tries to spread the word about the true effects of these grafts and their benefits, Voronoff’s career came to an abrupt end when he was forced to terminate his experiments under pressure from the scientific community, which questioned the results of his operations. 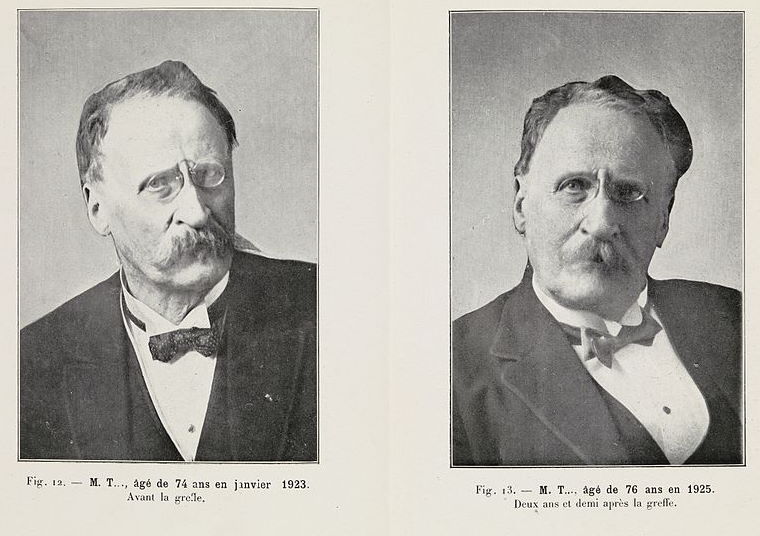 Another one of Voronoff’s patient receiving his rejuvenation treatment.

When Voronoff undertook his work, nothing was known about the mechanisms of rejection or the action of the immune system. The concept of hormones was not fully understood, and nothing was known about their role. In his book The Monkey Gland Affair, experienced transplant surgeon David Hamilton explains how animal tissue inserted into a human would not be absorbed, but instantly rejected, leaving a scar tissue, which might fool a person into believing the graft is still in place. When testosterone was isolated for the first time in 1935, Voronoff welcomed the news because he expected that this new discovery would prove his theories. However, when testosterone was injected into animals it didn’t rejuvenate them, nor did it prolong life. The news left Voronoff disappointed, and he was much ridiculed in the press. In the 1940s, Kenneth Walker, an eminent British surgeon, described Voronoff’s treatment as “no better than the methods of witches and magicians.”

When Voronoff died in 1951, few newspapers published his obituary. In the 1990s, some scientists even blamed Voronoff for being responsible for introducing the HIV virus into the human species, but that claim was later debunked.

Recent discoveries have shown that the gonads have an enormous influence on human behavior, and that discovery has formed the basis of many modern therapies, including anti-aging strategy of replacing hormones, which decline with age, to restore physical vitality associated with youth. Modern physicians no longer calls into question the fact that hormone production decreases with age, and it is possible to stop age-related changes with the help solely of hormone therapy. In November 1991, one of the oldest peer-reviewed medical journals in the world, ‘The Lancet’, suggested that the Voronoff’s studies on monkey glands should be reopened. By 1994, there were calls for a qualified apology from the orthodox medical establishment for dismissing Voronoff’s work. 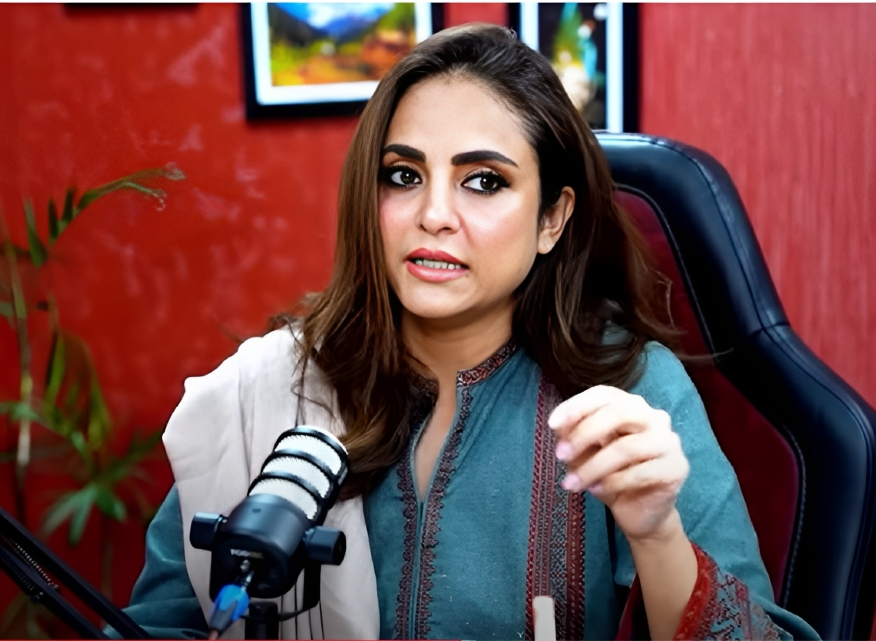 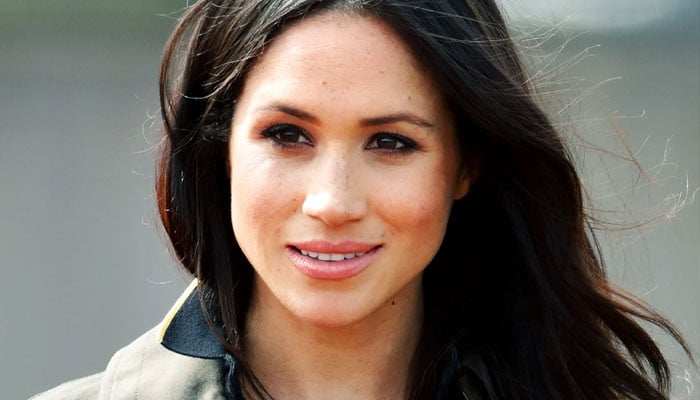 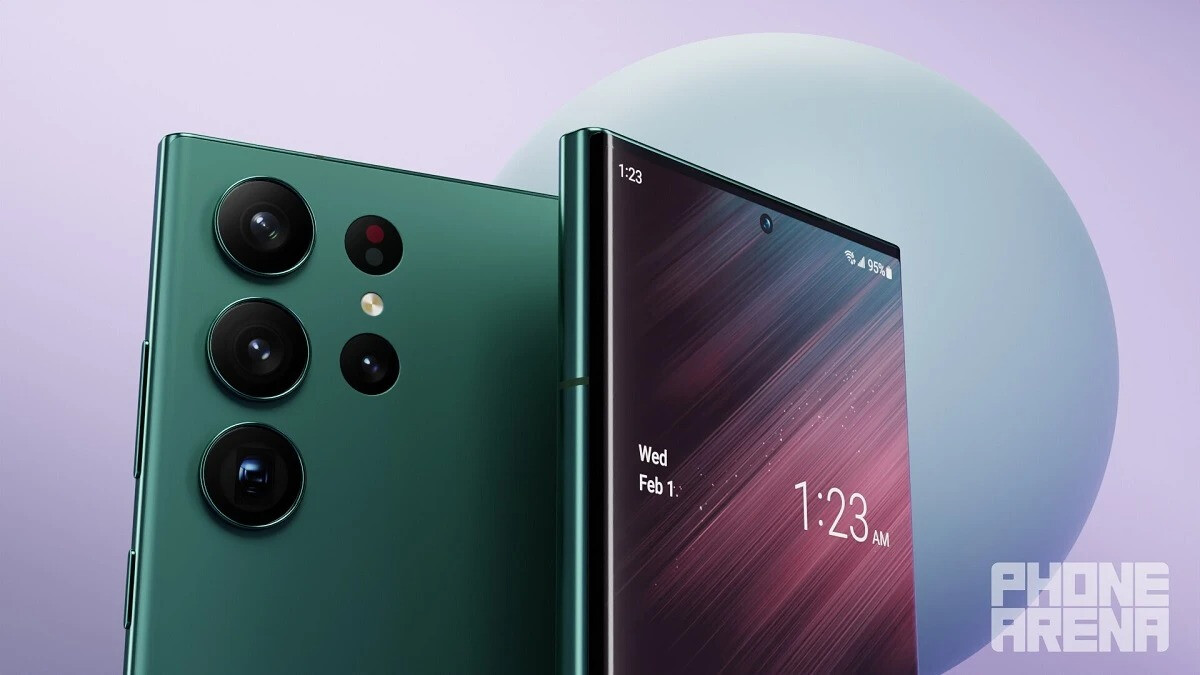