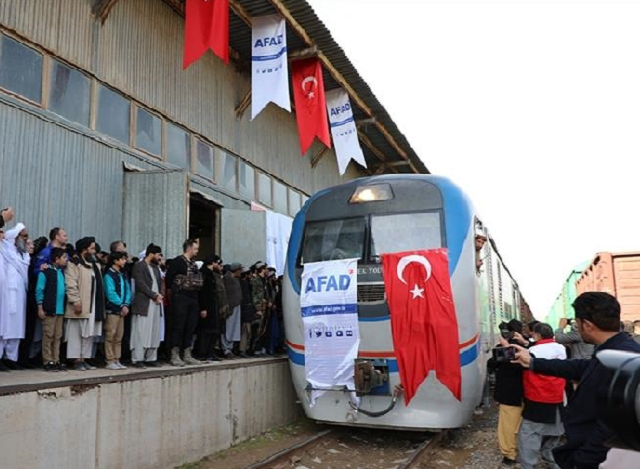 
The interim Afghan administration on Tuesday lauded Turkey’s government and people for sending aid and support to Afghans to help stem a dire humanitarian crisis.

“I would want to express my gratitude to Turkish president (Recep Tayyip Erdogan), the Turkish government, and the Turkish people for sending aid and helping us at this difficult time,” Karimi said.

He added that the interim administration in Kabul wants to establish good relations with Turkey as Turks are their brothers and sisters.

“We hope that Turkey will continue to assist and extend more support in rebuilding Afghanistan after decades of conflict,” he said.

Peace has been restored in the country, he said, inviting Turkish investors to come and invest in Afghanistan.

His statement came after a special charity train carrying 750 tons of emergency supplies from Turkey arrived in Herat, northeastern Afghanistan on Monday after traveling 4,168 kilometres (3,590 miles).

The train was received at a ceremony by Turkey’s Ambassador Cihad Erginay and acting Afghan government officials.

Also read: Turkey doesn’t have ‘luxury’ to turn back on Afghanistan: Erdogan

Under the umbrella of the state-run Disaster and Emergency Management Authority (AFAD), at least 11 humanitarian organisations from Turkey contributed to the delivery of humanitarian aid to Afghanistan, which is facing an extreme food crisis and is in dire need of assistance.

Around 12.9 million children in Afghanistan are in need of aid due to extreme weather conditions, according to Turkey’s Interior Minister Suleyman Soylu.

Aid groups have described Afghanistan’s situation as one of the world’s fastest-developing humanitarian disasters.

According to the UN, half of the population is now suffering from acute hunger, over 9 million people have been displaced, and millions of children are out of school.

Last month, the UN and its partners launched a $4.4 billion funding appeal to avert a humanitarian catastrophe in Afghanistan in 2022.

Millions of Afghans are on the verge of death, according to UN Secretary-General Antonio Guterres, who has urged the international community to release Afghanistan’s frozen assets and restore the country’s banking system.