In the late 18th century, a Hungarian inventor named Wolfgang von Kempelen presented to Empress Maria Theresa of Austria a sensational mechanical robot. Unlike other automatons of the era that can perform elaborate activities such as play an instrument or write with ink on paper, Kempelen’s machine displayed human-like intelligence—it was able to play chess against any human opponent and play well enough to challenge him. The marvelous machine fascinated spectators across Europe and America for the better part of a century, playing against and defeating personalities such as Napoleon Bonaparte and Benjamin Franklin. 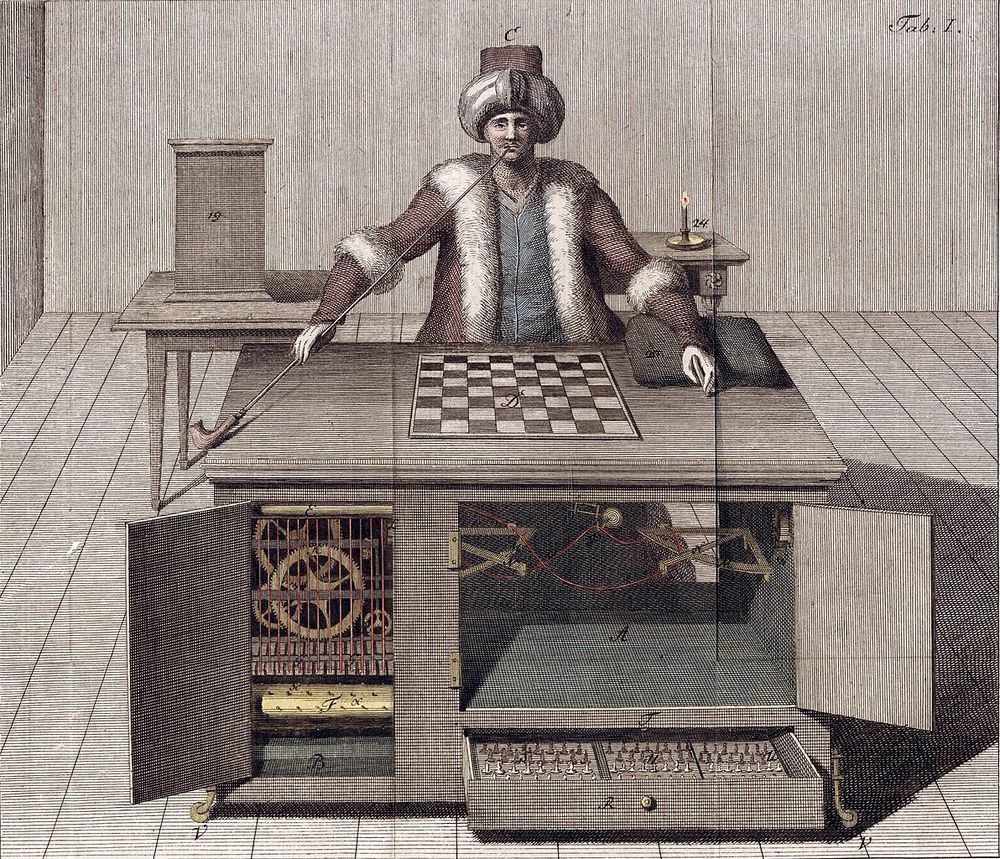 The Mechanical Turk. An illustration from 1789.

The machine called the Mechanical Turk consisted of a large cabinet, housing intricate machinery, on top of which stood a chessboard. A wooden mannequin dressed in Ottoman robes and a turban sat behind the box. Kempelen would begin his performance by opening the doors of the cabinet to reveal an elaborate mechanism of densely packed wheels, cogs, levers and clockwork machinery. Once the audience was assured that there was nothing hidden inside, Kempelen would shut the doors closed, wind the machine using a key, and invite a volunteer to serve as the Turk’s opponent.

A game of chess would begin with the Turk making the first move. The Turk would use its left hand to pick up chess pieces and move it to another square, before setting it down. If an opponent made an illegal move, the Turk would shake its head, and move the offending piece back to its original square. If the human opponent tried to cheat, as Napoleon did when facing off against the machine in 1809, the Turk responded by removing the piece from the board entirely and taking its turn. When he tried the illegal move the third time, the Turk swept its arm across the board knocking all the pieces down.

Opponents discovered that the Turk was an incredibly strong player, winning games against skilled human players more often than not. During a tour of France in 1783, the Turk played against François-André Danican Philidor, who was considered the best chess player of his time. Although the Turk lost the match, Philidor described the game as “the most fatiguing game of chess ever.”

As the automaton’s fame grew, people began to debate how it worked. Some people were willing to believe that Kempelen’s invention was actually capable of understanding and playing chess by itself, but most rightly concluded that the machine was an elaborate illusion and the wooden man’s movements were being controlled by Kempelen himself using magnets, or wires from afar, or the very least, by a human operator hidden inside the cabinet. One of the most vocal skeptic was British author Philip Thicknesse, who wrote a treatise on the subject titled The Speaking Figure and the Automaton Chess Player, Exposed and Detected.

Kempelen died in 1804, and following his death, his son sold the Turk and its disappointing secret to Johann Nepomuk Mälzel, a Bavarian musician. Mazel took it on a tour across Europe and the United States, during which Edgar Allan Poe saw it perform and wrote a long essay speculating on how the automaton worked. Poe suggested that a true machine should win all matches and display a pattern such as make moves in a fixed time interval, which the Turk did not. Poe concluded that the Turk had to be operated by a human.

After Mazel died in 1838, the Turk was bought by John Kearsley Mitchell, Edgar Allan Poe’s personal physician and an admirer of the Turk, who donated the machine to the Chinese Museum of Charles Willson Peale. There it sat at a corner utterly forgotten, until it was consumed by a fire in 1854.

The Mechanical Turk’s deception remained a secret for over 50 years until John Kearsley Mitchell’s son, Silas Mitchell, wrote a series of articles for The Chess Monthly  where he fully revealed the inner workings. Mitchell wrote that as the Turk was then lost to fire, there was “no longer any reasons for concealing from the amateurs of chess, the solution to this ancient enigma.” 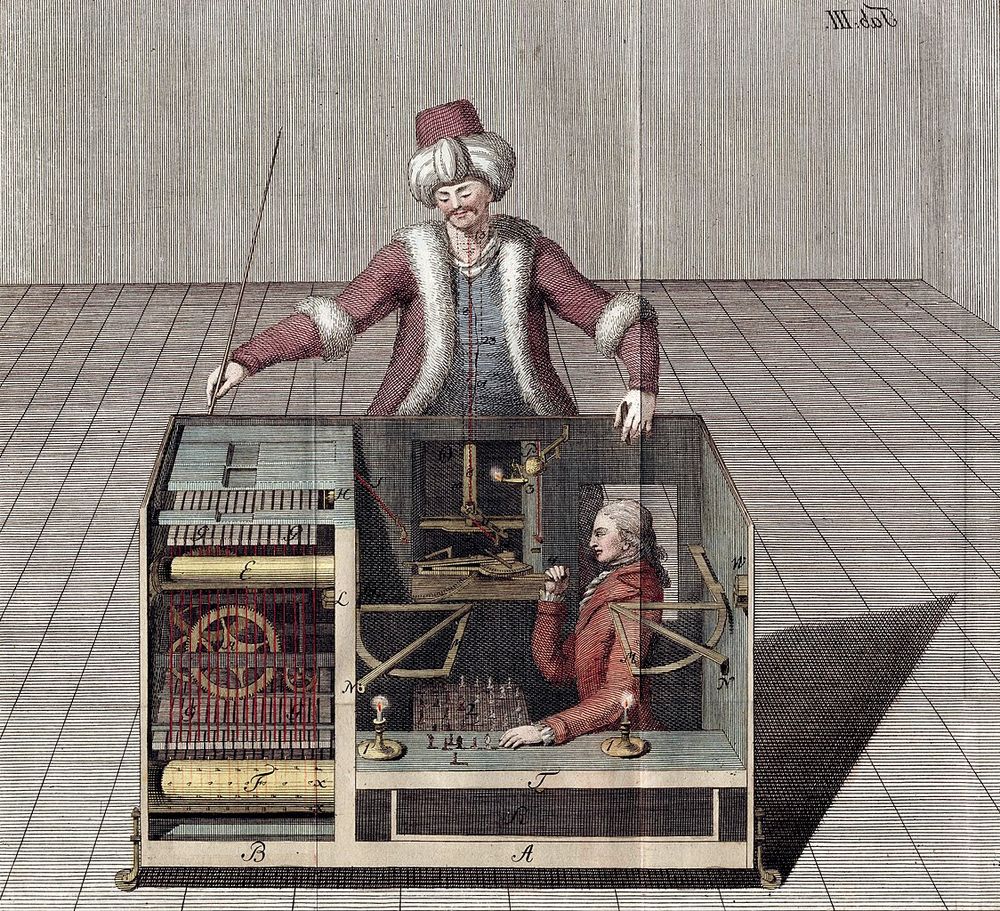 An illustration from 1789 that tried to explain the illusions behind the Kempelen chess playing automaton. However, the artist got both the position of the operator and the dimensions of the automaton wrong.

The Turk was a clever magician’s illusion. Inside the spacious wooden cabinet hid a human operator who pulled and pushed various levers to make the mannequin above move and play chess. The presenter was able to keep the operator hidden because he opened only one door at a time, allowing the operator to slide around the inside and evade observation. The sliding of the seat also caused dummy machinery to slide into its place to further conceal the person inside the cabinet. The chess pieces had small but strong magnets attached to its base, which attracted a corresponding magnet attached to strings under the board and inside the box. This allowed the operator inside the machine to see which pieces moved where on the chess board.

Kempelen and his successor Johann Malzel picked up strong chess players to operate the machine at various times. When Malzel was showing the machine to Napoleon at Schönbrunn Palace in 1809, it was the German-Austrian Johann Baptist Allgaier who operated the Turk. In 1818, for a brief period, Hyacinthe Henri Boncourt, a leading French chess player, became the Turk’s human operator. Once when hidden inside the automaton, Boncourt sneezed, and the sound was heard by the spectators creating a certain embarrassment to Malzel. Later, Malzel added some noisy gears to the Turk, in order to suppress any noise that could come from the operator.

When Malzel took the machine on a tour of the United States, he hired the European chess player William Schlumberger to operate the machine. Once after a show, two boys who had secretly hidden themselves on a roof, saw Schlumberger coming out of the machine. The next day an article appeared in the Baltimore Gazette exposing the matter. Edgar Allan Poe also noticed that Schlumberger was always missing during the show but frequently seen when the Turk was not playing.

“Moreover, some years ago Maelzel visited Richmond with his automata, and exhibited them, we believe, in the house now occupied by M. Bossieux as a Dancing Academy. Schlumberger was suddenly taken ill, and during his illness there was no exhibition of the Chess Player,” Poe wrote.

Despite the expose, fascination for the Turk did not wane. Several scholars studied and wrote about the Turk in the 19th century, including Daniel Willard Fiske who gave a biographical history of the Chess-player and Malzel in his 1857 book The Book of the First American Chess Congress. More books were published about the Turk toward the end of the 20th century. But even as late as the 1970s, some authors were still clueless about the actual working of the machine. In the 1978 book The Machine Plays Chess by Alex G. Bell, the author incorrectly asserts that “the operator was a trained boy (or very small adult) who followed the directions of the chess player who was hidden elsewhere on stage or in the theater.” 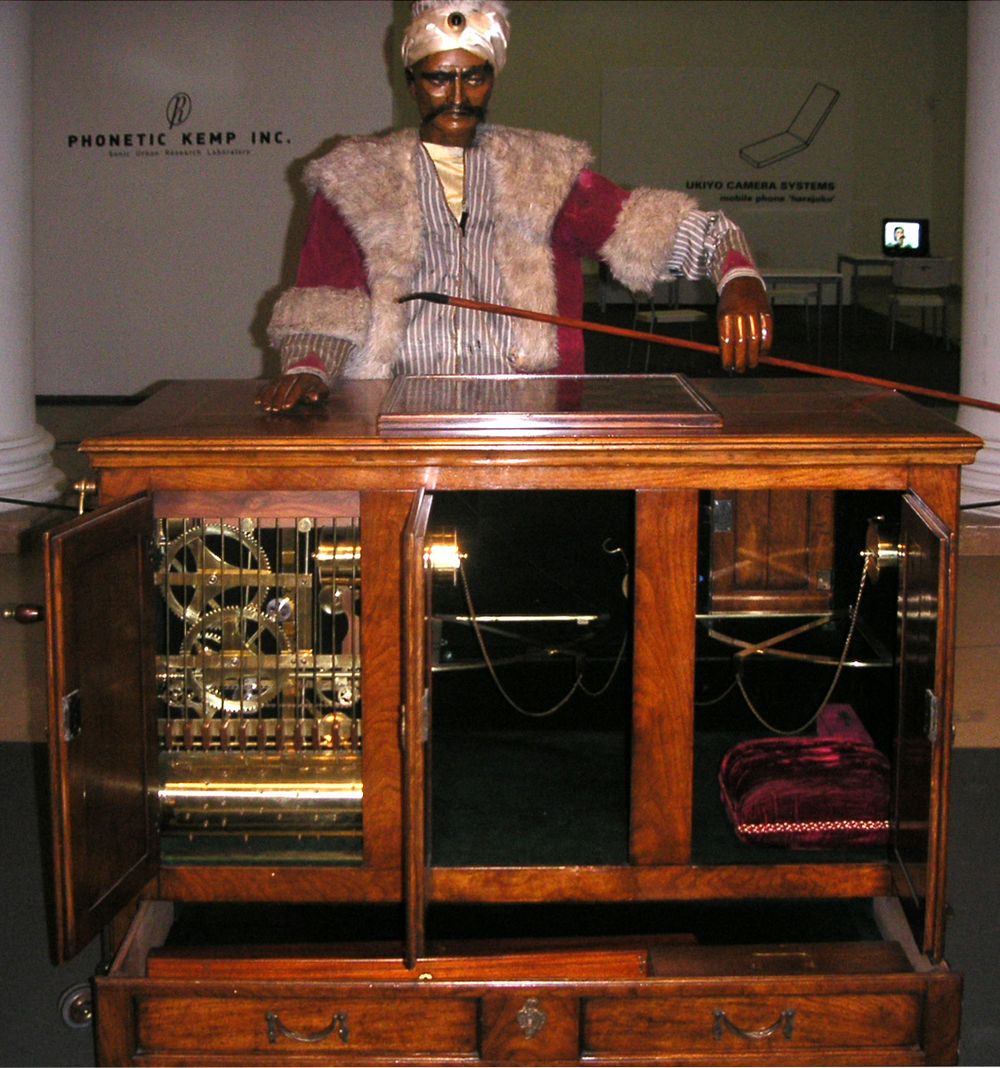 A modern reconstruction of the Turk. Photo: Wikimedia

The Turk also inspired a number of inventions and imitations, such as Ajeeb created by Charles Hooper, an American cabinet maker, in 1868. The fake automaton was presented all over the United States and attracted scores of thousands of spectators to its games. Ajeeb’s opponents included Harry Houdini, Theodore Roosevelt, and O. Henry. When Rev. Edmund Cartwright saw the Turk in London in 1784, he was intrigued and he wondered whether it was “more difficult to construct a machine that shall weave than one which shall make all the variety of moves required in that complicated game.” Within a year, Cartwright would patent the prototype for a power loom.

In 1912, Leonardo Torres y Quevedo of Madrid built the first, true chess-playing automaton called El Ajedrecista that was capable of playing an endgame with three chess pieces without human intervention. It would take another eighty years before computers could play a full game of chess and beat even the world’s best players.

While a modern computer can play chess better than any humans, there are still plenty of things that humans do better, such as identify specific content in an image or video, or write product descriptions, or answer survey questions. In 2005, Amazon launched a new crowdsourcing service that employed human workers to perform such tasks. Like Kempelen’s Mechanical Turk, Amazon’s online service uses remote human labor hidden behind a computer interface to help employers perform tasks that are not possible using a true machine. They named the service, which they categorize as “artificial artificial intelligence,” The Mechanical Turk, or MTurk, after the 18th century fraud automaton that was actually man-powered. 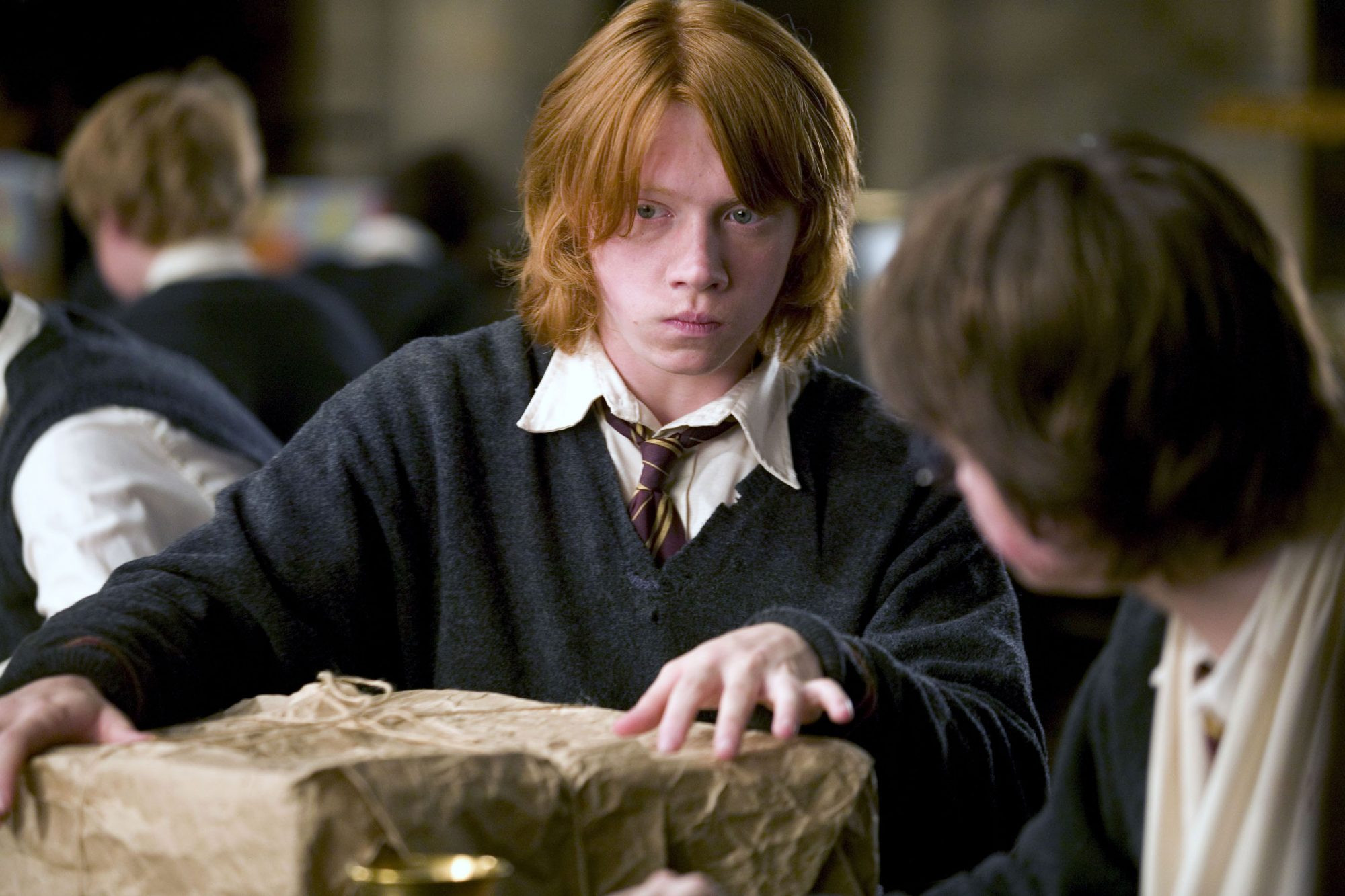 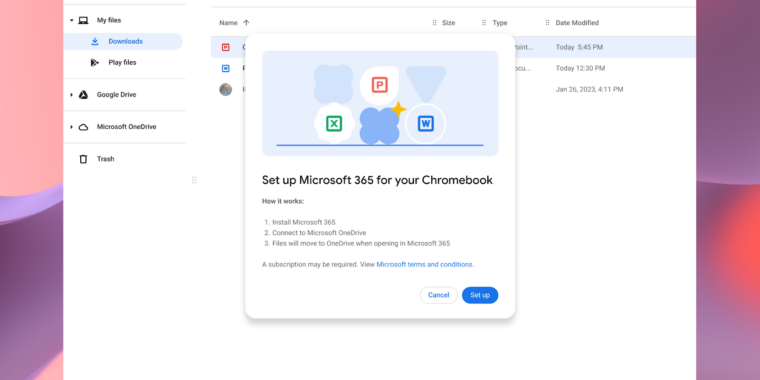