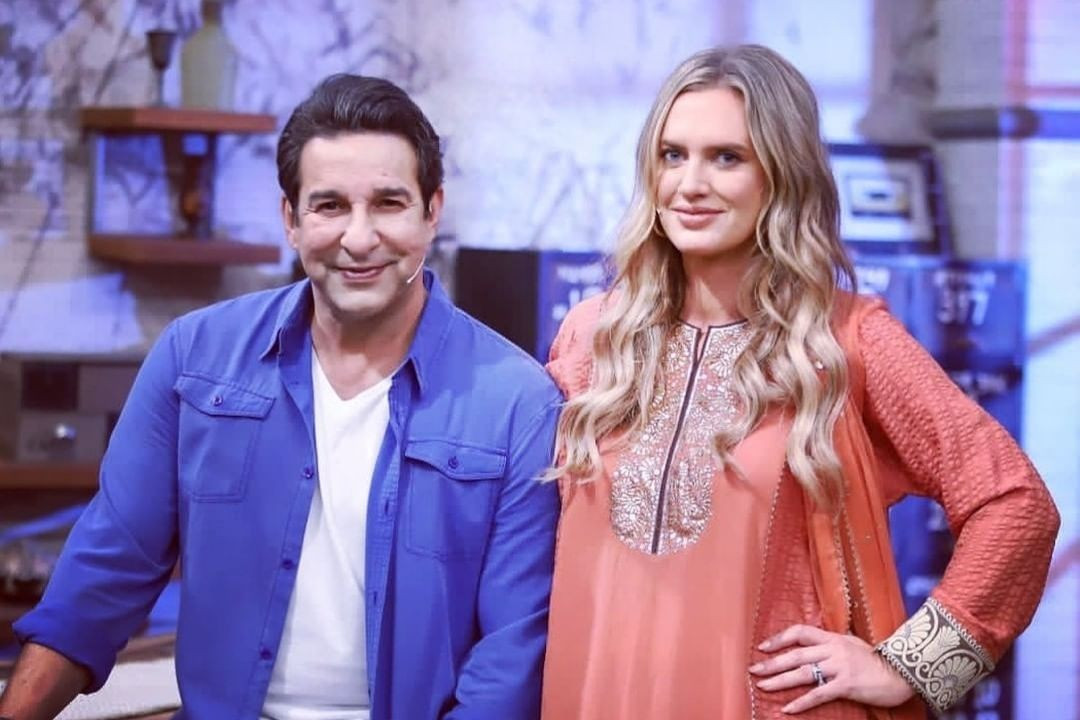 Celebrity couple Wasim and Shaniera Akram recently made an appearance on Time Out with Ahsan Khan, speaking at length about their multicultural marriage and how the two fit into each other’s worlds. The couple, who tied the knot in 2013, first met in 2011 and have a daughter together, as well as two sons from Wasim’s previous marriage.

Speaking about their first meeting, the former ace cricketer shared, “I met her at a friend’s BBQ in Melbourne. I was commentating for Star, I think the Indian team was touring. I used to work for ESPN Star then. She didn’t know who I was… Eventually, I told her that I was kind of a big deal in Pakistan.”

Elaborating on the same, Shaniera added, “You don’t marry someone from overseas, from a different culture, background and generation unless it’s something magnificent, right? But, we didn’t have the luxury of meeting up and seeing each other straight away. So, we had to communicate via phone and build a friendship first to see if it was even going somewhere. I didn’t know anything about cricket. I think that helped.”

Explaining how much Pakistan has grown on her, Shaniera shared how she feels far more at home in the country than in her native Australia. She reflected, “I didn’t know [much about Pakistan] to be honest… But, now, for me, Pakistan is the centre of the world. It’s an incredible place. I’ve grown here as a person, as a woman, as a mother, as a wife, and the most important years of my life have been here. I recently went to Australia, and I didn’t know who I was there. It was very weird.”

Speaking about how her marriage to Wasim is in many ways a childhood dream come true, Shaniera revealed, “I found a diary of mine from when I was a little girl, and I had written, ‘Please, God, I want to marry a prince from a faraway land and live like a princess.’ Can you imagine? I basically did marry a ‘Prince of Swing’ from a faraway land, and I get to dress like a princess every day in these beautiful clothes.”

When asked whether he feels the cultural differences creep up every now and then, Wasim explained that he had always been relatively more familiar with Shaniera’s culture than she had been with his. “I wasn’t used to Australian culture, but British culture. I played for ten years for Lancashire. I was there from the age of 21. So, for her, it was totally different. At most, she had been to Bali. She had never been to India or Pakistan or this part of the world. It was a huge step for her to come in, and Pakistanis accepted her with open arms. The love is mutual, I suppose.”

He added, “I don’t really feel [the cultural difference]. I’m used to living with her culture. But, when I want to listen to my music I’ll put my AirPods on. She likes Rahat Fateh Ali Khan so I’ll play that every now and then. But, yeah, we live in Pakistan so it doesn’t feel too different. I get tired of translating though. From our staff to Shaniera and from Shaniera to our staff.”

Sharing how Pakistanis often get her name wrong, Wasim said, “People mispronounce her name often. Shanaira, Shanoora, Shaniqua. I ask them to just read the name once, it’s not that hard to pronounce. Shaniera, like Sakeena.” His wife then chimed in, “Honestly, I think that’s why everyone calls me Bhabhi because they don’t remember my name.”

Recounting how Shaniera did not always know what ‘Bhabhi’ [sister-in-law] meant, Wasim added, “When she first arrived here people would call her ‘Bhabhi’ and she’d say, ‘Oh, so cute! Barbie.” I’d say, ‘Not Barbie, it’s Bhabhi.’”

When asked by the host about her strong stance on several social issues, from body shaming, pollution control to road safety, Shaniera responded, “I don’t think I’m ‘raising’ issues. I think the issues are already on everyone’s mind. As Pakistanis, we have a lot to talk about. We have so many issues. I merely highlight the ones we don’t talk about as much, and they’re important to me. I feel like anything I do or say that may save a life, for example, ‘Wear a seatbelt,’ ‘Wear a helmet,’ ‘Put your children in the back,’ ‘Don’t play with fire,’ I don’t know.”

She added, “I’m myself. I’ve grown in this country over the last ten years and I like the person I’ve grown into. But, I felt like I needed to use the power I have for good. If I can save something from destruction, I’ve done my job, that too in just one tweet. A lot of the time, I may upset some people, but if I do good rather than bad then I guess that’s a positive thing.”

On the same, Wasim asserted, “As celebrities, like you [Ahsan Khan] or other actors and big names in sport, their actions speak louder than words. I remember I was returning from somewhere, and the traffic police had stopped everyone. They especially stopped me and showed everyone how I was wearing a belt. If we drive around without a belt with our kid in our lap, that’s not going to go down well with the people of Pakistan.”

Kim Kardashian will spare Kanye West shame on TV: ‘Not what I’m about’