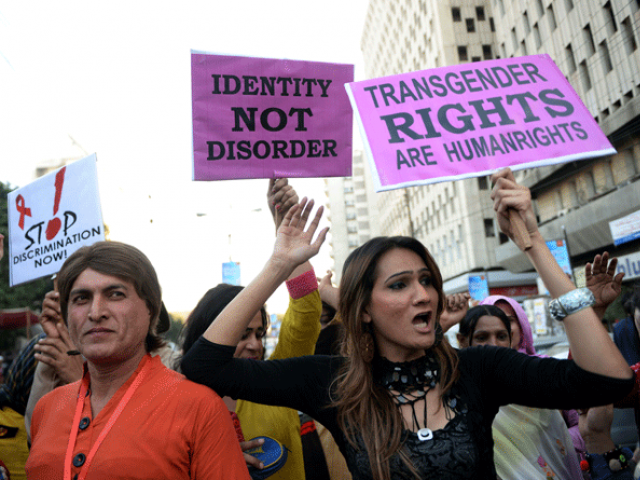 
While violence and bigotry are usually seen to come from external outlets, the injustice that spawns within the transgender community would seldom make the news.

At least until one Khwaja Sira from Okara district of Punjab decided to speak up about the harrowing reality that many of her fellow community members are made to face at the hands of their gurus.

According to a petition submitted to the Okara district police offer and Prime Minister Imran Khan, transwoman Neelam Pari has claimed that several gurus, who traditionally hold the most power, privilege and prestige in the Khwaja Sira community, have been involved in the human trafficking of transgender people who seek refuge under their wings.

Taking names, Pari Alleged that local gurus including Pinki and Nagina, have been long involved in selling transwomen from their clan to other gurus for anywhere between Rs0.5 million to rupees two million. A practice that she claims is not limited to Okara, but exists across the country. “If or when a community member contests to being sold, they are ostracised from the group at the behest their guru and liable to pay as much as Rs25,000 to Rs50,000 as penance for reacceptance,” the transwoman revealed.

Explaining the dynamics of her community, Pari said that local laws and customs don’t penetrate into the Khwaja Sira world, which has been kept on the fringes of mainstream society ever since the subcontinent was colonised.

This, she said, has over time made her community into a bubble, that operates outside the set dynamics of the mainstream society. “While the unequal distribution of power within the community makes it very much like a reclusive cult, where orthodox practices that benefit an individual but harm the rest continue to exist,” she added.

Transwoman, who claims to be fighting for the rights of the common among community members, says that oppressive power dynamics within Khwaja Sira spheres are responsible for the transgression of various human rights, but are rarely questioned by anyone from within the community and even more rarely by anyone from the outside world.

Speaking in this regard, Nigina, a Khwaja Sira from Punjab said that buying and selling of group members is a common practice within her community, and very much the norm. “It is how our community is shaped. We live in groups, we earn by singing and dancing at events, and part of the money we collect is handed to our guru, who acts as a family elder. So of course, the Khwaja Sira that is the most beautiful or dances really well is the one who will rake in the most money, and hence is an asset to her group. Other gurus are always willing to pay top dollar to recruit such individuals, and that is how the system works here,” said Nagina, who was herself bought by her guru against a payment of Rs80,000.

Pari however claims that the reality of trading Khowaja Siras in her community is more harrowing than what is often described by some. She contended that various gurus sell out young transwomen for prostitution, and rely on the guise of community customs like ‘face show,’ that are used to feed young community members to the sex work industry.

Speaking in this regard, Provincial Minister for Human Rights Ejaz Alam Augustine said that per the constitution of the country, no one has the right to buy and sell any human being. If anyone does so, action will be taken against such persons in accordance with the law. “The government is working to make transgender people independent, to give them their separate identity and rights. In some cases, there may be transactions between Khwaja Siras and the matter may be termed as buying and selling my department has not received any such complaint so far,” he maintained.

Pakistanis will call you ‘thieves’, ‘traitors’ wherever you go: Khan to rulers